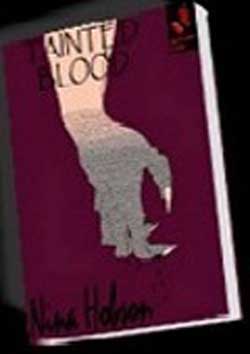 It’s nice to finally read something… original. Most things I get are glittering homoerotic vampires knocking up EMO girls. I also get a bunch of zombies that are very atypical. Blah. In any case there is no mistaking its originality as Tainted Blood is about demons! This scourge comes through their world to our own to feed on us. To these demons we are happy meals with feet.

The children are well developed with each having a distinct personality. Jennifer is a tomboyish girl who is strong and quick-witted. Her best friend Ron is a good athlete albeit a tad sociopathic when it comes to wildlife. Ron’s twin sister, Angie, is a bit lovesick for Jennifer and is always trying to get close to her. Throw in a little brother and parents who are equally as unique and you have a making of a really good story.

Demons cross the doorway between worlds to feed on humans. This particular demon has chosen the scary room off of Jennifer’s kitchen as a means to cross over. His presence disrupts their lives in such a way that nothing could ever be the same.

Tainted Blood is the first of a series and sets up the next nicely. The story itself sometimes gets lost within itself. Scenes and timelines do not always congeal in the way that you would expect but the kinks work themselves out. They certainly do not make the story bad. The copy I had was a Pre-RELEASE so I’m assured there’s another round of edits coming to clean these up.

Tainted Blood is best described as a young adult novella but on a higher age range. It is suitable for someone 13-17 and up. I typically enjoy young adult novels more than strictly adult novels. I want to get lost in the story and not in the verbiage. Don’t waste time! Find the book when it’s officially released. You will be able to find it on Hellicious Horrors.