Home | Pins & Needles: The Art of the Voodoo Doll

Pins & Needles: The Art of the Voodoo Doll 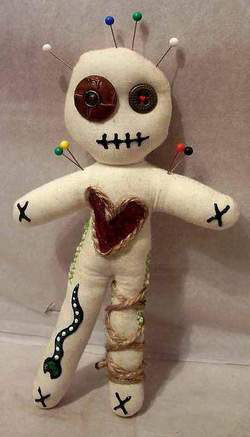 My world isn’t just all disjointed doll heads and dried out human body parts, occasionally it also includes voodoo. And of course quite a few dolls holding on to pins and needles for various reasons, I can imagine you are not surprised by this so let me give you a little lesson about the ins and outs of voodoo dolling.

Voodoo dolls as we know them are largely a New Orleans entity. Though fetish objects shaped as people were part of ancient African magical practices for thousands of years, and similar items can be found in some aspects of Haitian Voodoo, it was in New Orleans that the dolls became surrogates for actual people.

This practice started in the early 1900’s as a way to pin either good or bad luck on a specific person. Needles and pins were used to drive home a point rather than cause a specific ailment or pain.

Very rarely were real voodoo dolls used for purposes of malice, but they have suffered at the hands of pop culture, much like the rest of voodoo.

Thanks to delightful little creatures like the Zuni hunting doll in Trilogy of Terror and movies like Angel Heart and Skeleton Key, everything connected to the religion seems dark and sinister.

Though quite the opposite is true and it’s generally a belief system of positivity and celebration, the voodoo doll has endured the curse of being considered an object of black magic.

Now after having lived in New Orleans for awhile (and naming my son after the voodoo god of death) I have learned a thing or two about these little guys, so I’m going to tell you how to make your own. Of course you can buy authentic voodoo dolls just about anywhere, if you chose to pick one up somewhere instead of make your own I would suggest looking up Voodoo Authentica in New Orleans or the elaborate, elegant creations from Erzulie’s also in New Orleans. Both places are actual shops with well respected reputations in the French Quarter. Or if you just happen to like the vibe of voodoo art hanging around I would suggest adopting a few of the lovely and well made dolls from Trina Sandress of DarkMoonDoll . None the less, if you actually want to give a whirl to using one it’s highly recommended to make one with your own two hands. 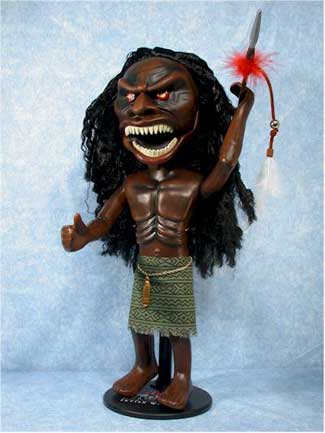 There is almost an endless collection of materials you could use – wax, wood, fabric and if you are so inclined you practice on any and all of them. I, however, will give you a basic instruction on a simple, classic fabric doll to do with what you please.

1). Start with a doubled over piece of fabric, a natural fabric like a 100% cotton would work best, white would be the best color – it creates a pure, unsullied doll ripe for use in any endeavor. If you know a thing or two about voodoo and the spirits you could pick a color coordinating with the energy of what you want to be under taking, but white works all around.

3). Cut out the pieces and assemble a collection of various things that will bring about whatever it is you want to have happen. Want to bring your little sister a big dose of good luck? Have her write something, in her handwriting, on a piece of white paper, or collect a few strand of her hair – both things would be even better. It never hurts to add a few little things you would associate with good luck – clovers, lady bugs, small icons, certain symbols drawn on white paper. And then combine it all with some sort of stuffing material – cotton balls, tattered rags, beans, sand etc.

4). Stitch the thing up. So you can’t sew either? It’s ok, even staples work, the point is just to get all of those things you just collected sealed into the little doll shape you cut out.

Now the most important thing: The entire time you are working on this project you should be thinking only of what it is you are trying to effect, think about what you would like the outcome to be, how you would like each element to bring some strength to your wishes and desires, try to stay focused and not let a lot of other thoughts come and go.

So you have your voodoo doll, now what? You can clothe it, paint it, tie with ribbons and bells or whatever you think is hot in voodoo doll wear at the time. The more time you spend with it, focusing on whatever it is you want, the better off you and your little voodoo friend are going to be. Once you have it all gussied up, write out, as specifically as possible, what you made the doll for and what you want it’s help with.

Once you’ve finished it, read what you wrote to the little guy and then fold the piece of paper and pin it somewhere on the doll, thanking it for it’s help. Keep it around, go back and talk to it, hold it as often as you like, again ,the more time you spend with it the better things will work. Keep these things in mind – you aren’t going to have any luck if you are trying to interfere with someone else’s free will, that just doesn’t work no matter how much time you spend playing dolls.

And whatever energy you put out there you are going to get back, meaning – if you are going to use these steps to create a legion of evil minions you are going to be saddled with a whole heap of negative energy that is going to make life more than slightly unpleasant. I don’t care how mad you are at your neighbor I really don’t think you want a steak knife wielding Zuni staring you down one night, so keep it nice.

And there you are, now you are doing voodoo. Maybe, if you are really lucky, next time I will tell you how to make your own zombie.