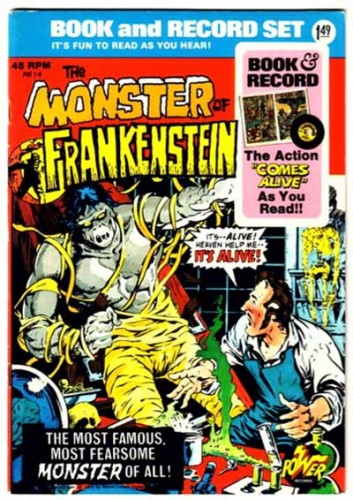 Today in the vintage zone, were going to explore some very tasty monster book&record sets. So, let’s not waste any time, and get right into it! Imagine you are holding what appears to be a comicbook. It is, and yet so much more. . .

Peter Pan Records, had been producing childrens records since the 1950’s. Their division, called Power Records, had gotten licensing to make comicbook stories. Both Marvel, and DC Comics were involved. But we’re going to concentrate on Marvel’s Monster offerings. Marvel was hitting the monster audience hard, with The Tomb of Dracula, Werewolf by Night, Frankenstein’s Monster, Man-Thing, etc. The Book and record sets, basically took one issue out of these series, and made it an audio book. Imagine some of your favorite monster comic books, in audio form?

These were meant as an educational tool for children, bridging entertainment and the literacy. What better way to learn to read, than following glorious Monsters in four colors?(I’m getting goosebumps)!

Frankenstein comes to life, with delicious Mike Ploog art, in The Monster of Frankenstein! It’s basically Mary Shelly’s classic story, with a slight variation. Victor Frankenstein is in pursuit of the Monster, on a ship bound for theArctic. He relates his tale to the ships captain. . The sound is good. The only disruption, is the beep to turn the page.

Comparing the record book, to the comicbook, you’d notice a few changes. They changed the overall color of the covers. The original was black, green, white. The record book is black, red, yellow, white. Either way, it’s

The Tomb of Dracula story, “Terror in the Snow”, is a reprint of the original comic. It has been retitled for the kids. The original was Snowbound in Hell. What parent wouldn’t want their little monsters saying”Im going to read Snowbound in Hell, now! “

Gil Kane cover, Gene Colan interiors. Story by Marv Wolfman. Great story! Here Dracula is pinned in the snowy Alps, after a helicopter crash. Rachel, an enemy, is kept nearby as a food source. There is the dynamic of “mortal enemies being trapped together”. Blade makes an appearance, and defies an attempt on his life. He gets mistaken for being bitten by a vampire. Good sound. Nothing like the hiss and pop of vinyl records. 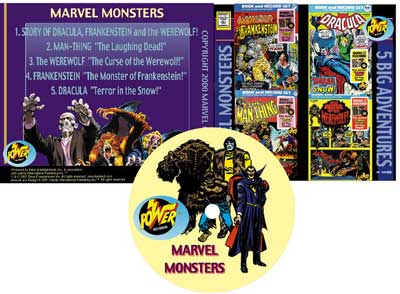 With the next book&record, you have an awesome transformation sequential cover by Neal Adams. This is” Marvel Spotlight on- Werewolf by Night”. Interiors by Mike Ploog. Story by Roy Thomas.

Basically, this is an origin story. Jack Russel, learns of a curse on him. The curse will supposedly transform him into a creature(werewolf), on his eigthteenth birthday. (um, I didn’t get anything like that for my 18th. WTF ?).
It’s monstrously entertaining. But, wait! We’re learning to read in the process? Cool!

The next offering is The Man Thing number 5. “Night of the Laughing Dead”. Story by Steve Gerber. Cover and interiors by Mike Ploog.

Ok! Who wants a story about a suicidal clown, his lover, a hermit, a ruthless land devloper, and a mucky swamp creature? I do! I do! The clown commits suicide, and the other players are brought together, to watch his life portayed in flashbacks by his ghost. Ok, that sounds like standard educational entertainment for kids. Remember. This is when jungle gyms were all metal on top of concrete slabs! No wood chip mulch for us! !

Those were all 45 records. Now take a look/listen to this large 33 record with book set. Drawn by Neal Adams. Its “A Story of Dracula, Frankenstein, and The Wolfman”.

It’s an interweaving story. Luciously illustrated by Adams. It starts with Baron Von Frankensteins nephew, Vincent, and his girl being saved and put up for the night in a castle, by a Count.
The Count surprises Vincent by kidnapping his girlfriend, and forcing him to duplicate his uncle’s experiments to make a monster out of body parts. Of course, the monster comes alive. He throws Erika, the girlfriend where she’s attacked by the Werewolf (they list it as Wolfman on the record, but call him the Werewolf within the story).

Be sure to stop in the Vintage Zone again, Maniacs!