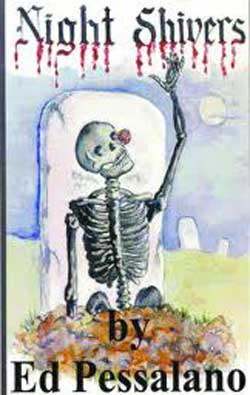 Night Shivers by Ed Pessalano is like walking down a well-worn path through an ancient forest. As a child the tall trees with their withered branches scared us like long skeleton arms reaching out to grab us, but as an adult there just old trees. The book itself is a compilation of short (sometimes very short) stories.

Night Shivers is very reminiscent of Scary Stories told in the Dark but missing the parts to tell you when to say Boo! Almost every story in the book is a retelling of a campfire tale or urban legend that has been herd over and over again. You have the mysterious helper that turns out to be a ghost, the terror ride that is filled with real terrors, and the caller in the night come to collect a soul. There are a couple of stories that I did not recognize and did grab my attention, but as soon as it had the story quickly ends. The Story The Mourning in particular started out good with the unassuming uncle and the aunt who was trying to warn her nephew who had come to stay with them about her husband’s bizarre activity that has her so worried about her nephew’s life.

The story could have been expanded and very terrifying but it seem like we were on the express train to get to the shocking ending, which would have been a whole lot more shocking with a lot more story. I also found myself adding my own expansions to the stories to make them more interesting. One big issue I did have with reading this book was that the author wanted to make sure you got the scary in each story, after the scene took place with the shocking reveal one of the characters or the author himself would tell you what just happened again just in case you missed it.

In the end this book is just filled with familiar paths well-traveled by many others before but with a tour guide to point out to you all the stuff you already know. I give Night Shivers one shiver out of five, or is that just the breeze coming in through the window.