Hey everyone. I recently had a chance to chat with Josh Howard, the creator/writer/artist for Dead@17, about the newest chapter in the series debuting in March 2010. If you have not had a chance to check out any of the Dead@17 stories I highly recommend doing so. The books have good depth and are very original. Josh’s art style is very attractive to the eye as well. I recently became a fan of this book after picking up the Ultimate Edition trade, and then reading all of it in a matter of a few days.

So lets jump right and and see what we can find out about Josh and Dead@17: The Witch Queen. 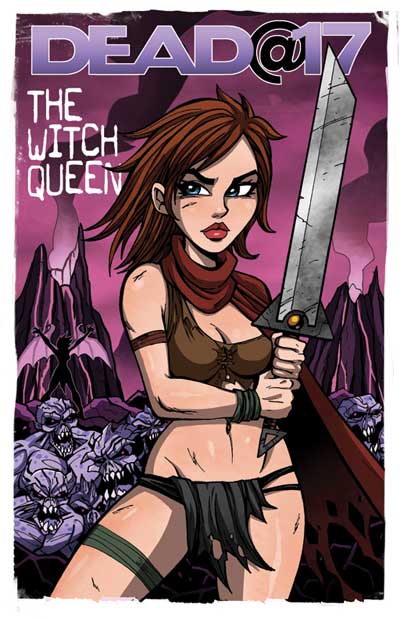 DD: Alright so lets start out simple. Who are you?

JH: Josh Howard, creator of Dead@17 and other ridiculous concepts.

DD: Comic wise what have you already done?

JH: Lost Books of Eve, Black Harvest, and Clubbing are the main things I’ve been involved with.

DD: Alright so what do I need to know about Dead@17?

JH: It’s about a teenage girl named Nara who discovers she’s the key to the end of the world. Her adventures have spanned 5 mini-series with 2 more on the way.

DD: Where did the idea for the series come from?

DD: How much fun are you having creating with this universe?

JH: It’s been fun but it’s also been very difficult and trying at times. But I’m probably having more fun with it now than ever. 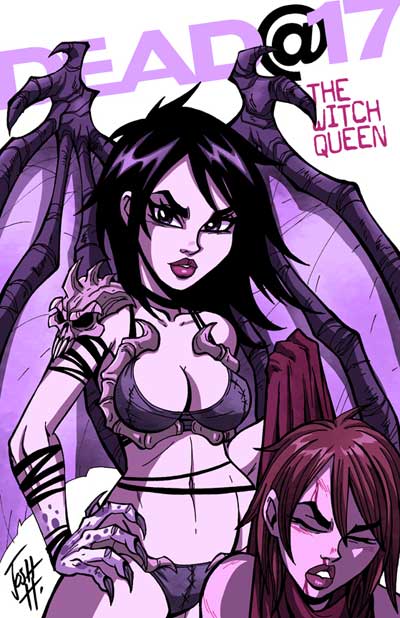 DD: How much farther can you take this series? Do you see an end in site?

JH: After “The Witch Queen” in March, there will only be one more mini-series and that’s the end.

DD: So after the events in Dead@17: Afterbirth, where do we find Nara now?

JH: Nara is now banished to Purgatory while the devil is roaming free upon the Earth.

DD: Can we expect any surprises coming out of Dead@17: The Witch Queen?

JH: Definitely. A new character is introduced who has answers that Nara has long been searching for.

DD: For new readers is this series going to be a good place to jump on board?

JH: Unfortunately, no. New readers would be best served by picking up the Ultimate Edition (containing series 1-4) and Afterbirth (series 5) before jumping into “Witch Queen.”

DD: In general how have fans responded to the Dead@17 universe so far?

JH: The fans have been great and there’s more coming aboard all the time. I couldn’t have carried the series this far if it wasn’t for them.

DD: Any moment from a convention or show in particular since you started that just stands out to you?

JH: Just seeing people covered with tattoos of my artwork is something I’ll never get used to. And when I say covered I mean entire arms and legs. It’s crazy.

DD: So what are you reading these days?

JH: Lots of SF/Fantasy. I’m really into Steven Erickson’s Malazan series right now, plus I’m trying to work my way through The Wheel of Time. Mistborn, Shadows of the Apt, and Name of the Wind are all recent favorites as well.

DD: So lets sum it all up, why should people go out and get Dead@17: The Witch Queen?

JH: Because it’s a crucial arc to the series that sets the stage for the final chapter.

DD: Thanks so much Josh.

If you would like to check out what Josh is up to you can at joshhoward.typepad.com/ You can also pre order Dead@17: The Witch Queen now online or through your local comic shops.