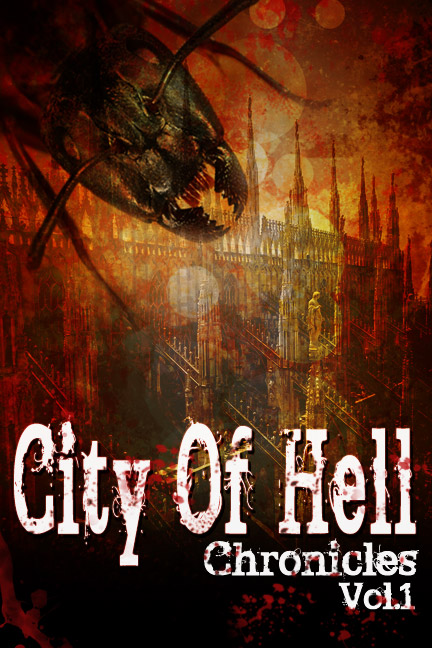 The Ant-Headed Old One ‘The Great Maurr’ has risen and brought hell to earth. The land is scorched and the human race decimated, eaten or tortured. Only three cities remain, a crumbled, dying version of their former selves: London, Moscow and Hong Kong. The Great Maurr’s own City of Hell dominates most of North America. Its diabolical influence has turned ordinary citizens into torturers, debased slaves, lunatics and zealots.

This is the nightmarish premise that underpins the first in what is expected to be a series of anthologies. The legions of a demonic insect God rise up and ravage the earth. Humans become food, slaves or forced surrogates in a mutant breeding programme. All hope is lost. Yet even amongst the carnage and the flames, there are loose pockets of survivors, all driven by that innate human capacity to adapt and endure. It’s the tales of these survivors that we experience as the authors guide us through this Satanic New World Order.

We learn how the ascent of The Great Maurr is facilitated by the horological machinations of an old clockmaker (pleasant echoes of Le Marchand ). Simultaneously we travel to Hong Kong and meet the sinister Stock Takers, a fantastic ‘baddie’ that wouldn’t look out of place in an episode of Doctor Who. Then onto London, where a sinister religious cult hides out in the ruins of a church, through the skeletal remains of North America and into the subterranean slave colonies and Nazi style eugenics programmes.

All the writers (with the exception of the editor) are women, and we witness events, not exclusively, but chiefly through the eyes of female protagonists. But there’s no evidence of the fairer sex here. Our hesitant path is gleefully littered with a trail of guts, gore and eviscerated cadavers. Not that this is an out-and-out gore fest. Whilst the pages are steeped in blood, the stories have a deep emotional resonance (possibly attributable to gender), which helps gives the book literary guts, too.

Each tale explores a different aspect of these hellish cities and its inhabitants and therein lies the book’s appeal. We’re not restricted by a linear story telling structure so are free to travel around to different locations and times. The wide variety of writing styles and tones bring something different to each chapter. There’s action, emotion and eroticism. The characters are all strong and three-dimensional. There are fantastic illustrations. One of the stories is authentically written as a pathology report. The writers show a real hunger to create something fresh and exciting, and by and large they succeed. So whilst the future looks bleak for the denizens of the City of Hell, the future looks far brighter for the City of Hell mythos. Four Black Stars.