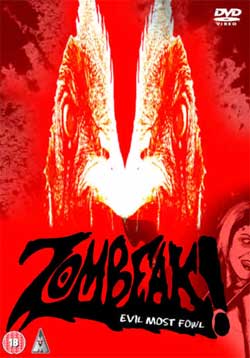 On the darkest night of the year, when Satan is allowed free reign to walk the earth, a motley crew of Satanists kidnap a sharp tongued southern waitress to be a given up as the Dark One’s bride and mortal host of the antichrist. But when her rowdy redneck friends botch up the ritual in a violent rescue attempt, all power of hell is inadvertently transferred into the most unlikely of hosts: a sacrificed chicken! Now, the Satanists and Rednecks battle one another as an evil most fowl threatens to swallow their souls and transform them into a demonic army of the walking dead! Who will survive the terror of Zombeak!?

During the opening minutes a terrible fear began to creep its way up my spine and foreboding thoughts entered my mind. What were the next seventy minutes of my life going to contain? What horrible cinematic travesties would I be forced to endure? How much low budget, bad acting and rotten production was going to invade my headspace? Then slowly, I think it began as an uncontrolled chuckle leaped from my lips, charm started to emanate from the screen. This movie that first filled me with dread turned into a twisting, campy ride through absurdity. I began cheering for both sides and reveled in the joy that would grow even after “Zombeak” ended.

Melissa, a waitress who’s terrible at her job, is chosen by four Satanists to be the bride of Satan and give birth to the antichrist. They kidnap her in front of her boyfriend and take her, by hearse, to their house of worship. Bobby Ray, the boyfriend, is brother to a sadistic local cop whom we meet as he’s killing an innocent man for kicks, and enlists him and Melissa’s manager to help save her. The Satanists sacrifice a chicken to summon their master but Melissa is able to thwart their plans to impregnate her. The only way for Satan to remain in this realm and fulfill the prophecy is to posses the dead chicken. You read that right, he possesses the chicken. Even as a chicken Satan turns out to be terrible guest and should never be invited into your home. Even though the tables turn several times the evil chicken sets about to kill them all and turn them into empty eyed zombies to carry out his bidding.

What follows is in the same vein as Tromafilms’ “Poultrygeist: Night of the Chicken Dead” without the musical numbers, lesbians or recognizable actors (even if they are p*rn stars.) As is the case with “Poultrygeist”, “Zombeak” is a bad movie. When boiled down, the redneck all-stars versus the gothic Mystery Inc. where Scooby is an undead chicken trying to take all their souls is a bad idea. Sure, it sounds like it might make a passable comedy but it would have lost the unintentional humor that rides the backbone of this effort. Instead of numerating each of the faults let’s just assume the usual suspects that come with a low budget, poorly written and badly acted movies. Without them we wouldn’t have ‘good’, bad movies now would we?

The sound is reminiscent of the older Italian horror classics as done by Fulci and Argento which have such a special place in my heart that it actually made Zombeak that much more endearing. Though the dialogue was often on-the-nose it is rife with one-liners that alternate between groans and outright laughs. What works in the script lays in the twists and reversals of fortune for each group and character as capture, death, escape and resurrection cause the audience to root for everyone at different times as they overcome their obstacles. These turns actually hold interest and lend anticipation as to what’s coming next, even if it’s the worst rendition of “Amazing Grace” or a line like “Come on out you Kentucky fried piece of s**t.”

Now understanding that there’s certain subjectivity to enjoying bad horror movies there’s rightly a certain amount of disagreement between which are so bad they’re good and which are just bad. The real strength of “Zombeak” lies in the obvious passion and love for the project that’s shown by the actors and crew. Therein lays the key which makes any of these ‘so bad they’re good’ style of movies entertaining. I’m still telling people about this movie with a smile on my face extolling how wonderfully bad this is. Despite all of its failings there was a lot of fun had in the filming and it shows through clear enough to excuse offense. What would sink another movie is bolstered by heart and lots of it.