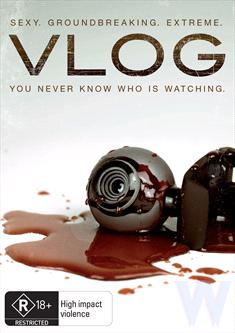 From the producers of SAW, VLOG is a groundbreaking extreme-horror film about a real-life webcam girl whose online murder is not what it seems.

“VLOG” is a rather interesting little film. I was ready to write the film off ten minutes in, but I ended up really enjoying the way the events play out. And damn, was I caught off guard by the gore in the film. The few death scenes that appear in the film were, in a word, GRUESOME. I never would have expected that. The weight of the film rests on the lead actress, Brooke Marks, who does a nice job with the task. Produced by Twisted Pictures, “VLOG” was originally released on Break.com in installments, now it has reached home video from Anchor Bay Entertainment, in the complete form. And for anyone who may be unfamiliar with the terminology, vlogging is blogging, with video.

Brooke Marks (playing herself) basically introduces us to her through a video blog. She lets us know that she isn’t the typical video blogger that talks about dumb stuff. She wants us to know that what she has to say is important and much more interesting than the others (though she is pretty much the same as the others). She begins to do a set of social experiments by taking her video camera with her when going on dates and we see how she is with relationships. Things begin to get weird when an anonymous vlogger begins to post videos of people she has had in her videos, killing them on camera. With each murder she becomes more and more afraid of what will happen next. She goes to the police for help and only time will tell if they can solve the mystery soon enough before Brooke becomes the next victim. 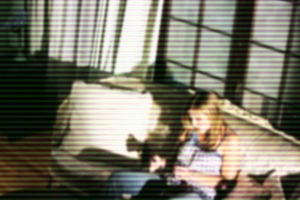 I admit to being a bit bored during the films first twenty minutes or so. We mostly just hear here talking about stupid stuff, relationships, men, whatever. I know it’s important to the story, sets up Brooke’s personality, etc. I just wasn’t that interested. What held my attention was Brooke herself. She is incredibly easy on the eyes and she has charisma. You may not care about what she is saying but it’s hard to turn your eyes away from her. Once things take a turn for the worst, the story gets interesting. I really would like to give a shout out to the films’ special effects crew who really stepped things up a notch and blew me away with some of them. There is an amazing dismemberment, lots of blood, and one death that just needs to be seen to be believed.

The majority of the film is shot much like a video blog but does stray from the format a bit. I really can’t think of any other way the film could have been presented other than how it was accomplished. I really think it would have been so much more fun for me had been able to watch the film unfold in installments like it was originally released online. Only a minor setback and the completed feature works as is. The supporting cast does a nice job, the only one who gets any real screen time is Officer Rudy Perez (who just so happens to be played by Rudy Perez). Not a great actor but doesn’t do bad.

“VLOG” is an entertaining film that never overstays its welcome. It’s fun and a bit frightening. I’m giving “VLOG” *** out of 5 stars. It’s not great but there is something a bit interesting about the concept and aside from the first few minutes of the film, paced very well. Brooke Marks carries and sells the film. Being a real-life video blogger helps with the authenticity. I’m kind of surprised that I have never heard of her before, though I hope she doesn’t abandon film work. She is fun and charismatic to watch and deserves to be in the movies. I’m not talking “Annie Hall” here, just have some fun in the horror genre. She deserves it!