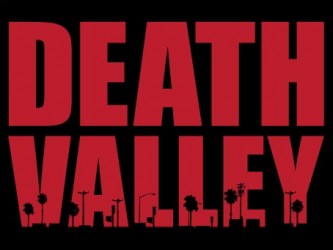 Per MTV
A year ago, vampires, werewolves and zombies mysteriously descended upon the streets of California’s San Fernando Valley. Death Valley is the dark comedy that follows the cops that capture the monsters, and the camera crew that captures the cops.

Follow the horrific yet comedic exploits of the newly formed Undead Task Force (UTF), a division of the LAPD created to combat the emergence of monsters in the San Fernando Valley. Death Valley showcases the outrageous and courageous men and women working the toughest beat in the US: Death Valley.

Balancing dark humor with horror, the show is built upon cold-blooded conflict and character driven comedy, following the cops bent on keeping the streets safe from the presence of the paranormal. Documenting each case of zombie, vampire and werewolf encounter is the daring camera crew that is embedded within the task force, quickly revealing that the monster problem goes much deeper than anyone could have possibly imagined.

Full of subtext about living in today’s insane world, Death Valley is at its core a fun, non-stop thrill ride featuring chases, hardcore kills, and extraordinary creatures. The zombies are disgusting, menacing and brutal, the vampires are dangerous, smart and powerful and the werewolves are beastly and insane. From “blood-for-sex” prostitution busts to undead traffic jams, every call from dispatch will take you to a place you’ve never been: right to the bleeding heart of Death Valley.

Per Wiki
Death Valley is an American horror, black comedy mockumentary television series broadcast on MTV. The series premiered on August 29, 2011.[1] The series follows the Undead Task Force (UTF), a newly formed division of the LAPD, as they are filmed by a camera news crew documentary-style, as they capture the monsters that roam the streets of San Fernando Valley in California. As of yet there is no news as to the future of the series.