Another year, another Context and all is right with the world for at least a couple days. For those who don’t know, Context is an annual speculative fiction convention in Columbus, Ohio. Basically, it is an opportunity for fans of Fantasy, Sci-Fi and, of course, Horror fiction to spend a weekend geeking out along with authors, publishers and other professionals related to spec-fic. I won’t bother saying that it is an excuse to drink profusely, since few of us really need an excuse for that. Just think of it as a combination of Fango’s Weekend of Horrors and Dragon*Con for people that read and are generally too lazy to dress up. 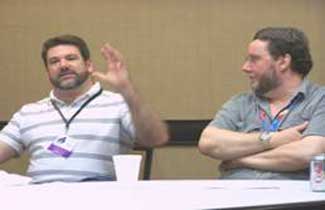 Last year was my first at the con and I had a blast getting to hang out with other absolute dorks, meeting some of my favorite authors like Brian Keene and Gary Braunbeck and discovering a ton of new authors and publishers to adore with sycophantic fervor. Needles to say, I had high hopes for this year so let’s get to the details:

(The Bizarro 101 panel, shortly before sprouting antlers and speaking Esperanto)

Yahoo-be-dooby-doo-type highlights:
1.)One of the great things about this con is how easy it is to meet and chat with the stars of the show. Maybe the lower number of attendees (compared to the giants mentioned earlier) makes interaction easier or maybe writers just don’t do the rock star attitude, but every author, publisher and artist present is incredibly accessible. The best time to be had was spent jawing with people I worship as if they are really and for true human beings like me. I still giggle like a little girl knowing that I talked to Gary Braunbeck and spent an inordinate amount of time shooting the sh*t with Necrotic Tissue guru R. Scott McCoy. And, not a damn person there tried to charge a dime for an autograph.

This is absolute heaven for fanboys.
2.)Thinking of R. Scott McCoy, few moments match the time he spent giddily showing off sketches from an upcoming NT graphic novel based off of the “Bad Billy” stories. I don’t think it was humanly possible to resist the excitement pouring off of him and the sketches had the goods something awful. This will be a book to keep your eye out for.

3.)As much as this will label me a dork among horror lit dorks; I dug the hell out of the poetry panel featuring Matt Betts and Catherine Callaghan. Betts was just plain hilarious (if you don’t think that poetry can be funny, just check out his See No Evil, Say No Evil) and Callaghan is one of those shining lights that never ceases to amaze me. The wit, wisdom and pure f*cking POWER that radiates from her as she reads work that makes me feel like there is no hope at all for the crap I write is rapturous. I’ve heard that she is set to be next year’s poetry guest of honor and they may have to retire that position after she is done with it. Yes, she’s that good. Buy Other Worlds sometime.

4.)Gene O’Neil may not have actually read any of his new book A Taste of Tenderloin during his book reading, but he was incredibly engaging and amusing to listen to and talk with. Plus, the Winkses brought tasty, tasty crab butter and sweet n sour meatballs to munch on. I haven’t gotten a chance to read the book yet, but Publisher’s Weekly gave it four stars.

5.)Gary Braunbeck’s superb reading of “Flesh is Fleeting… Art is Forever” totally in character complete with a pompous art critic voice made all the more hilarious to anyone who knows his purely blue collar background. Sorry Lucy, but I think I have a man crush on your husband. 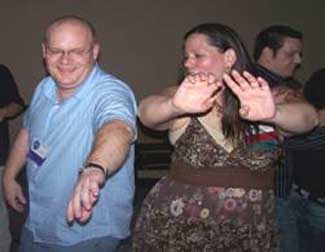 Not so yabb-a-doo-ey:
Let’s face it; there will always be aspects that aren’t quite as exciting.

These are mine.
1.)Before the con commenced, I ran into a bit of trouble in the absence of a panel list until a tad too close to the start date for my taste (just a little over a week). Since I had already planned on going, it was no big deal to me but that made it a bit hard for me to convince other people to go and it may have turned others away. I doubt I would have been willing to spend the money knowing only the guests of honor.

2.)I’m sure that I’m being a tad bitchy here, but who honestly thinks that it is a good idea to have panels starting at ten am and stopping at 10pm? Last time I checked, authors don’t normally tend to stick to “the early to bed-early to rise” mantra. I know I don’t and it made for some cranky, spaced out people come Sunday.

3.)I didn’t like the new hotel as much as last year’s. It is swankier, but less comfortable and certainly more expensive than I could afford to stay in. At least there was a Motel 6 within walking distance that was charging a little less than half the Doubletree rate.

4.)During Lucy Snyder’s reading of some of her work from Chimeric Machines (you can read a review of it on this very site), an anonymous attendee perfectly summed up much of what I had been feeling of the course of the con by saying that she is “a reader at a writer’s convention.” This year’s focus seemed dead-set on writers over readers, with almost all of the panels centering on writing advice. Coming as a fan more than as a writer, they didn’t interest me nearly as much as the discussions of the work itself that seemed more prevalent last year. I hope they have more discussions like the ones over going from humor to horror, Bizarro fiction and what exactly it is that makes a monster next year. That type of stuff is why I come. On the other hand, if most people are coming as writers, then they are just bending to the desires of their audience and I can’t bitch. 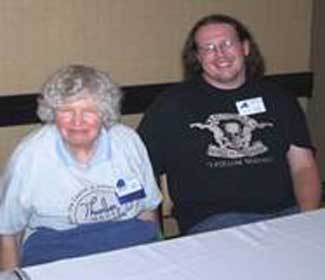 (My new hero, Catherine Callaghan, and a giddy fool – me)
Not quite sure moment:
A complete stranger saying “So you’re the douche I’ve been hearing about” and being called the Massengill Avenger. In all honesty, I’m a bit proud of the title. 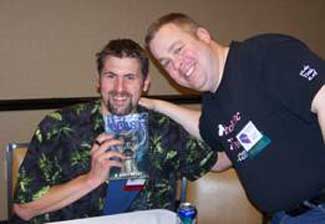 “My Milk is never going to taste like Peter Straub’s Writing” –Horror Guest of Honor Christopher Golden, on influence and writing styles. “The two things I remember most about Jimmy Carter: he saw a giant monster rabbit and a UFO” -Holly McClure

“Maybe Authors are the biggest monsters. We do horrible things to people all the time.” -Holly McClure, discussing icky things that go bump and schlorp in the night.

“I was thinking about the old phrase ‘a woman needs a man like a fish needs a bicycle” and I felt that there is a huge difference between need and desire.” –Lucy Snyder, on her poem “The Fish and the Bicycle”, an exploration of a fish’s filthy lust for a gleaming Schwinn. 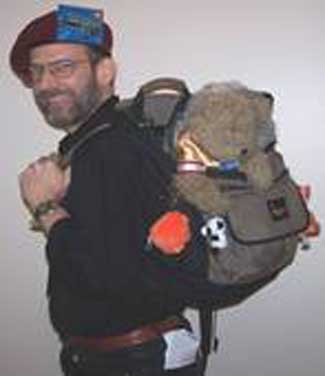 Final thoughts:
Despite some issues and what is most likely an undue amount of nostalgia for my lost hymen, I had a good time. Certainly, I felt that I got my money’s worth. On the other hand, both my own significant other and that of a good friend were practically miserable. Part of it is that you do really have to be lost to the dork side to enjoy this type of thing, but I also think that making the con as a whole more reader-centric wouldn’t hurt. Not everyone who likes to read is a writer and even writers like to sit back and be a geek every once and awhile.

That said, I’ll be back with bells on and a giant grin stretched across my face next year.