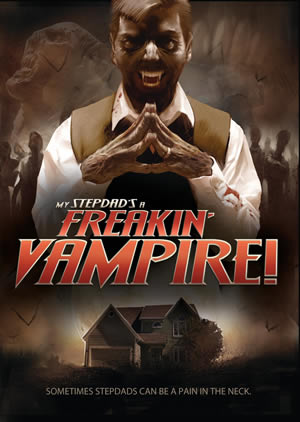 Rusty Funkouser has a lot to deal with in his teenage life: high school, a controlling mother and a step father who turns out to be a vampire. When his newly remarried mother travels on a business trip, Rusty is left at home with his new step father. Suspicious of the man, Rusty discovers his step dad’s secret life and horrifying plan. Rusty’s step dad is a freakin’ vampire and he plans to open the gates of hell, unleashing his vampire army upon the world. It’s up to Rusty and his best friend Chad to stop his step father from taking over the world.

My Step Dad’s A Freakin’ Vampire plays like a sophomoric attempt at blending genre favorites Buffy and Fright Night. It rarely succeeds troubled with a bland, derivative script, wooden acting and lackluster special effects. The idea is there for something entirely entertaining, but the film maker’s fumble the ball holding out the best special effects for the conclusion with no where to take the story at that point. In the end the film is unfunny, lame with low grade CGI special effects even if the bat-vampire creatures during the conclusion are a highlight of the movie.

For a comedy it takes itself surprisingly serious; or, for a serious horror film, it tries very hard to be funny without much success. The script is unbalanced and awkward. The dialog is cheesy and flat. It tries and occasionally sends one off, “The dishes aren’t going to wash themselves.” followed by “My ass isn’t going to kiss itself.” Amusing, at times. For the most part, the scripts offers up exposition after exposition trying to set up the plot, scenes or twists and turns. It never feels comfortable letting the characters do that for them or letting the story evolve. Trimmed down, this might have made a fairly entertaining television episode; stretched out as it is, it makes for dull entertainment.

The biggest mistake the film makes is miscasting the step dad. Actor Larry Peterson makes for an effective dorky step dad but has trouble transforming into an imposing vampire. It’s a bit too goofy. Lahcen Anajjar plays Rusty Funkouser fairly well and manages to keep the film afloat with his affordable personality. M. A. Alford tags along as Brad supporting Lahcen admirably. If nothing else, the actors portraying the various zombies and vampires bat demons during the conclusion do a great job posing and showing off the make up and effects. Many of the other supporting roles are played for laughs and hit and miss along the way. The films treats the viewer with a ineffective high school principal, his dim-witted bat-brained brother to “Janitor Van Helsing.” 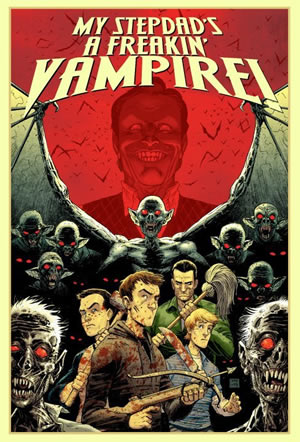 My Step Dad’s a Freakin’ Vampire takes itself too seriously to become a cheesy b-movie romp and the jokes are too lame to balance the bad acting, poor lighting and awkward framing. Shot after shot, character walk starkly from point “A” to point “B” – it all comes across staged and unnatural. Except for a few establishing shots, the film is rarely shot outside eye level making it appear like a stilted sitcom. Fun, creative, if somewhat derivative creature designs are undermined by sloppy CGI. My Step Dad’s a Freakin’ Vampire is an awkward attempt to blend genres that never seems to fight the right tone or voice. It’s hard to recommend but might be worth a look for the curious.