Comic Review: The Vessel of Terror 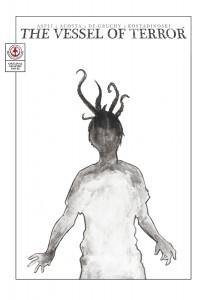 “Out in the Arctic Ocean, the research vessel Alesia manages to capture a mysterious Magnapinna squid, an animal never before captured by mankind. The researchers, led by Maria, decide to take the specimen back to port in Bergen, Norway. However, what they bring home isn’t just a scientific wonder but also a thing more horrific than Pandora’s Box. Soon, madness creeps into the crew of the Alesia and friends become monsters.”

Dying Breath: 4.5 out of 5
ARRGH! Shiver me spine and turn on the lights, this is one creepy sea monster comic by the team of Aspli and Acosta! Okay, well wait can I technically say sea monster? Yeah I can say that but I need to add some Lovecraft style to it so let say Sea Cthulhu. The artwork in this book is just above and beyond on a few levels. I will point out some parts where angles seemed odd which is the reason I did go a little lower on the score, but people seriously, one artist… 2 different styles… and he delivered on a scare factor that is rarely done in comic books. The story telling at first seemed jumpy, until I really got what was going on. There are 2 stories being told here and they work so well in the way they break each other up. Now I am not a Lovecraft aficionado, I know the basic of the basics, but I do know that when I read a story with these themes, they typically have an ending that makes me happy and puzzled at the same time. This book was no exception. I was so satisfied with how it ended but, is there more to come? What happened to _____? Oh you tricky writers and your great storytelling. This book is worth every penny you pay for it. I feel horrible having it sit in the review pile for as long as I did, because now I have to sing its praises after it has been released. Plain and simple Lovecraft fans, Slasher Fans and Monster Fans this one is a must own.

If you would like to buy or know more about The Vessel of Terror you can find it at www.markosia.com/

Tags The Vessel of Terror