SYNOPSIS:
“A mysterious magnetic spool found during a construction project is discovered to have originated from Venus. A rocket expedition to Venus is launched to discover the origin of the spool and the race that created it.” (courtesy IMDB)

REVIEW:
This week I’m discussing a film that not even I have seen yet, found in the dank dark recesses of my local television station. The label said the film takes place in the far-flung future year of 1985, when scientists discover an ancient alien artifact buried deep beneath the earth, and decide to send a team of astronauts to the source: Venus! That sounds a lot like 2001: A Space Odyssey (1968) to me and, to confirm my suspicions, it’s based on a novel by Stanislaw Lem, who gave us the most famous of all Soviet science fiction stories, Solaris (1972), so it must be long…I mean, good – right? 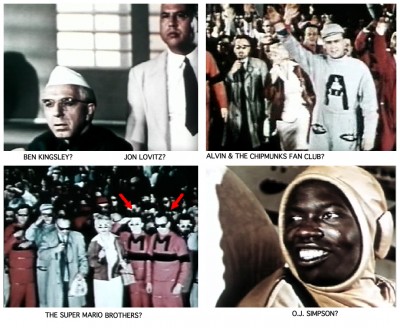 And what a cast! Judging from the photos I saw, we have Ernest Borgnine, Michael Ironside, the Super Mario Brothers, Anna May Wong, an Oompa-Loompa, Ben Kingsley, Barbara Billingsley, the Alvin And The Chipmunks fan club, O.J. Simpson, R2-D2, George Takei, and what looks like a slightly overweight Liam Neeson with Superman hair. Yes, I’m sure that’s Liam. So prepare for a superior science fiction story with lots of well-known character actors, as I view for your enlightenment – as well as my own – On The Good Ship Venus! Sorry, I mean First Spaceship On Venus (1960)! 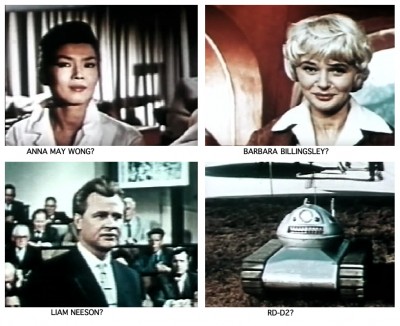 Okay, I’m now half-way through watching First Spaceship On Venus, and this is not what I expected at all – I was expecting a good film! I’d like to say I’m disappointed, but that doesn’t really cover it. You go and put the kettle on while I look up First Spaceship On Venus on the difference engine, and I’ll be back in a jiffy to tell you why I’ve been sitting here for the last forty minutes.

Are you back yet? I found out that First Spaceship On Venus is actually a Soviet-financed film with an anti-nuclear message. You see, back in the fifties the USA became obsessed with enormous rockets penetrating deep space, evidenced by the large number of films made during that time. Strangely enough, America seemed to be the only country making these kinds of films. Japan was busy with giant monster smackdowns, Italy had its hands and feet full with swords and sandals, Mexico had its mind set on crime-fighting wrestlers and, with typical efficiency, Germany didn’t even bother with the metaphors and went with smut. But the USA wasn’t alone in the creation of such films. In fact, their rival in the Space Race, Russia, was also making major space movies, and if these films were anything to go by, Soviet space missions were just as wacky as their American counterparts. Ponderous and introverted, yes, but still wacky.

Case in point: First Spaceship On Venus, originally released as The Silent Star and, although based on the novel Astronauts by Stanislaw Lem, the award-winning author denied any connection to his book, as it had been adapted by a committee of vodka-fueled Marxists and a paper shredder. It’s a real pity, as Lem’s books have been translated into forty languages and have sold over 27 million copies, including Solaris, which has been filmed no less than three times – three times more than absolutely necessary. In fact, my old friend and fellow author Ted Sturgeon once told me that Lem was the most widely read science fiction writer in the world.

Director Kurt Maetzig is one of the most respected filmmakers of East Germany, but not because of tonight’s film. He received his PhD in 1935 for his dissertation entitled The Accountancy Of A Film-Copying Institution. Riveting stuff indeed. He joined the state-owned film studio known as DEFA in 1947 where he directed and edited The Eyewitness weekly newsreel, and his first feature film, Marriage In The Shadows (1947), turned out to be the country’s most successful movie of the post-war period. He also directed The Rabbit Is Me (1965), which was banned for being too critical of the East German establishment.

As some of you may have worked out by now, First Spaceship On Venus doesn’t actually star Ernest Borgnine, Liam Neeson, or any of those other actors I mentioned earlier. Nonetheless, there are some interesting people wandering aimlessly in front of the camera, like Lucyna Winnicka, a Polish actress who appeared in twenty-one films and played the lead role in Mother Joan Of The Angels (1961), which took the Cannes Film Festival by storm. There’s also Günther Simon, who plays the American pilot Raymond Brinkmann. He starred in such films as Anna Susanna (1953), Swings Or Roundabouts (1953), Ernst Thalmann (1955), Damals In Paris (1956), The Dress (1961), and The Sailor’s Song (1958), but the most interesting actor tonight by far is Yoko Tani, who plays the pretty Doctor Sumiko Ogimura.

Yoko Tani was a French-born Japanese nightclub entertainer who was limited entirely to being cast as stereotypical orientals in French films. When the United States occupation of Japan ended, the French discovered Japanese cinema, culminating in a total of six Japanese films being entered at Cannes in 1955. Movie-making maestro Akira Kurosawa met Tani at the festival and took her back to Japan, after which her acting career really took off. Despite this, Tani could never cut her ties to the nightclub scene, and when producer Betty Box was looking to cast her in The Wind Cannot Read (1958), she eventually found Tani in a strip joint in Paris. I can’t imagine Box in a strip joint – ahem. Ah, Paris. That reminds me of the time I had to improvise a fan dance at Moulin Rouge after Josephine Baker slipped on one of those banana skins she insisted on wearing around her waist. But that’s another story for another time. Let’s get back to First Spaceship On Venus while I reminisce about Gay Paris and sunbathing topless on the Riviera. Now, there’s an image…

There you have it, the East German extravaganza known as First Spaceship On Venus. Only two actors, one writer and one director made it into the American credits yet, astoundingly, there are three sound engineers listed! The music is an obnoxious collection of stock cues that offer up a comical tune for the robot and predictable oriental-sounding music for the introduction of Sumiko. In the rocket control room we hear music from Destination Moon (1950), the destruction of the Venusian city is set to the music from This Island Earth (1955), and throughout the film we hear snippets from The Creature From The Black Lagoon (1954), Forbidden Planet (1956) and others, so it’s like listening to a sci-fi mix tape – with dialogue.

Speaking of dialogue, the dubbing is worse than usual, repeating the line “It’s incredible!” ad nauseum, and you know English is not their first language when Omega is pronounced ‘ummagah’. This sort of quality is to be expected from Crown International, the same terrorist organisation that Saved Hitler’s Brain (1968) and unleashed The Creeping Terror (1964) upon an unwilling world. It’s not a complete write-off, though. First Spaceship On Venus has some terrific set designs, nice special effects and extremely impressive Venusian landscapes that look like a Yes album cover. If you’ve enjoyed our visit to the Eastern Bloc tonight, be sure to tell your friends. If not, just keep it to yourself unless you want to be jabbed in the leg by a poison-tipped umbrella. Anyway, please join me next week when I serve-up more celluloid slop and force-feed it to you through the boob tube without a spoon for…Horror News! Toodles! 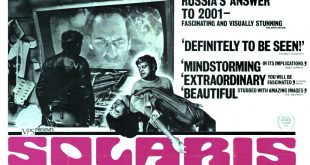