Good DAY my bloody fiendish friends…Today i bring you another special FX man thats done make-up work on such Hollywood Blockbuster films like Pirates of the Carribean 2 & 3, The Chronicles of Ridd*ck, and many others! Hes Also works with the famous Chiodo Bros. FX team who have done amazing work on such cult favorites such as Killer Klowns From Outer Space! Lets get this MOVING! 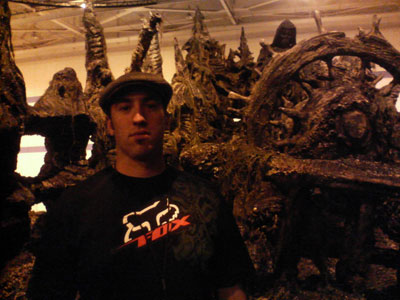 Dr. Gorehound: When did you first enter the world of Make-up FX and prosthetics, and what aspect do you find most intruging and fascinating about it?

Frank Ippolito: I started when I was 10, I sculpted and molded a halloween mask on my own. From there I just kept learning more stuff and meeting people that showed me better ways of doing things. The best part about it is I get to make things with my hands. Tangible things that never existed before, and its always a new challenge…not the same ‘ol crap every day. And even when I loathe a job, it’ll be over soon, and then I’ll be on to a new adventure!

Dr. Gorehound: What fx company do you operate or own now?

Frank Ippolito: I’m the shop supervisor at the Chiodo Bros. 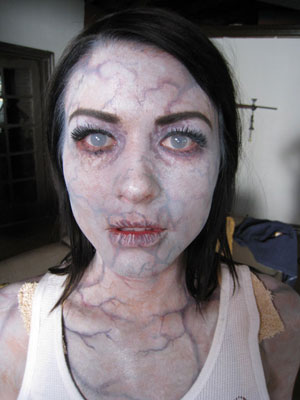 Dr. Gorehound: What types of FX do you specialize in the most with your company and the Chiodo Bros.?

Frank Ippolito: The Brothers are best known for their characters and puppets. We don’t get as much makeup work as I’d like to do, but its cool either way! The cool thing is that when work is slow, or there aren’t jobs for me to do, they let me do freelance gigs…so I get my makeup fix that way.

Dr. Gorehound: What films/TV shows have you done FX on that left others in disbelief?

Frank Ippolito: At the top of my list has to be Pirates of the Caribbean 2 and 3. I was one of the supervisors in the makeup lab on that one (I think my credit is head lab tech), and we also built a lot of props and bodies.. I also got to do a lot of work on Chronicles of Ridd*ck. That was a fun show for me to work on, even though I know a lot of other people hated it! On both Ridd*ck and pirates I was working for Ve Neil and Joel Harlow. I got to department head this reality show for MTV called “One Bad Trip” where kids go on spring break and stuff, then I’d do disguise makeups on their friends and family and then they would spy on them. It was a hectic show, but I came out of it with some great makeups for my portfolio.

Dr. Gorehound: Do you also do gorie and bloody FX?

Frank Ippolito:YAH! I love doing zombie makeups! Most recently I did 2 short films with Teller (from Penn and Teller) where he is in a post-apocalyptic Vegas, and fighting off zombies. If you google “& Teller” or “& Teller 2” you can find them. The first one won a contest and is on the special edition of “Diary of the Dead”. 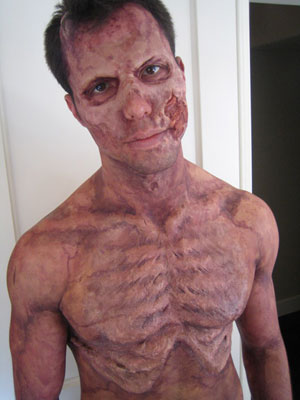 Dr. Gorehound: Can you explain to us which fx you did on the hollywood films, The Chronicles of Ridd*ck and Pirates of the Carribean: Dead Man’s Chest?

Frank Ippolito: For Ridd*ck, I sculpted and cast up all the little scars on the bad guys necks. Christian Tinsley showed me how to do Pros-Aide transfers, and we did them that way. We also made the masks that were on the characters called “Lensors” and did these RAD zombie-ish makeups on these things you barely see. They’re these psycic things that are under some sheets that are reading Ridd*ck’s mind. There were also a bunch of other misc prosthetics like scars and cuts that people had.

For Pirates…I did a ton of stuff, I got to sculpt the “P” scar on Johnny’s wrist, and I molded and cast, and operated Davey Jones’s Heart, and molded a bunch of prosthetics for the cannibals and scars and wounds for the pirates. Some were pros-aide transfers and some were foam. Then after about 3 months of building stuff, I got to go to the Caribbean for 3 months for filming. We went to 2 different islands, and It was awesome! I got to sail on the Black Pearl on its first day of shooting for the sequals, and run round the jungle with pirates and cannibals. It was truly surreal.

Dr. Gorehound: Do you also do some CGI (computer generated imagery) on films?

Frank Ippolito: I personally don’t, but the brothers do. We have a couple computer rooms and editing bays where we do the post production for all kinds of things. 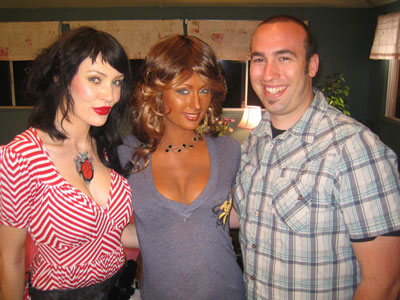 Dr. Gorehound: Do you also direct or act in films?

Frank Ippolito: A few years ago when I met Teller, I also met one of his guys that builds their tricks and sets up their show named Zeke. We have a similar love for cinema and teamed up with Teller and formed a company called “Ghost Works” to make some little films. From there Zeke and I have directed 3 short films, the third of which has Dean Cameron in it (he played Chainsaw, in the movie “Summer School”) It should be done in the beginning of the new year and doing the film festival rounds. We have one more short in pre-production and a feature in development with the Chiodo Bros. As far as acting, I’m not really an actor, but I have puppeteered things and worn Creature suits.

Dr. Gorehound: What are the films Gay Zombie and Zombie Prom about, and what FX/prosthetcis did you do on those?

Frank Ippolito: Gay zombie is a fun short about an undead kid that is struggling with being a zombie and “coming out” I know its doing the film festival circuit, and everyone should go check it out. I basically did the zombie makeup and built a few gags for it. We did some compressed air squibs too, but the crew I had working on it with me were kind of a bunch of dunces, so I think they ended up doing it in post. Zombie prom is a short film adaptation of a play. Its kind of like Grease with a zombie in it. Oh, and Ru Paul was in it too. Hahahah. 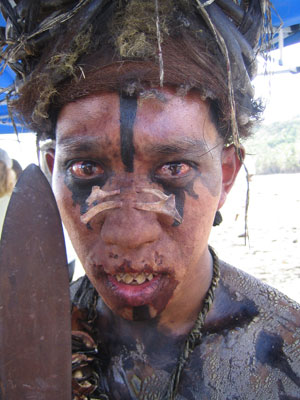 Dr. Gorehound: How is it like working with FX legends The Chiodo Bros. and are you a fan of their work on Killer Klowns from Outer Space?

Frank Ippolito: Working with them is awesome. We’re like family. We’re all Italian and from the east coast, so we get along great. I love how they have their own style with Killer Klowns…and how their style translates into a lot of other projects that they have done.

not day goes by where I don’t see people trying to copy the style. Its iconic!

Dr. Gorehound: For what films have you done animatronics or stop motion animation on?

Frank Ippolito: One of the cool things about my position is that I get to do a little bit of everything. I feel stale if I have to just run foam or make molds or do makeup all day long. I’m fortunate enough to have an equal competence for the artistic side as well as the mechanical side, and that is a rarity in this town. I think a lot of people like the idea of doing everything, but to do either of them well, is a different story. A few years ago at another shop I built the animatronic stand-in baby for the tv show “Friends” with this guy named Russ. It was totally packed with servos and didn’t have room for anything else by the time we were done. I have built a few things here and there, but that’s probably the most recognizable. I don’t personally animate for stop motion nor have I built the armatures, but I have molded and cast plenty of puppets for various projects here at the shop. Sometimes out of foam, sometimes
silicone. 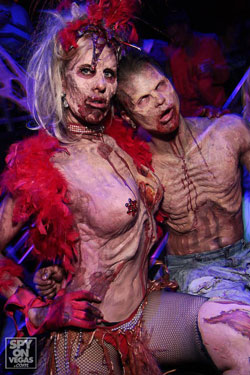 Frank Ippolito: Yah, “Skeleton Returns” is the sequal, and I was the makeup dept. head and I also built and wore the monster suits in that film. I had a group of 7 interns working for me on that one. The budget was sooo low, that was the only way I could do it! They all got some excellent experience making creature suits and working on set, and I got my monsters built!

Dr. Gorehound: What films have you done fx with the chiodo bros. on?

Frank Ippolito: I have been here for over 3 years now, and we have only done a small amount of feature films in that time. We have been keeping busy with commercials and music videos and stuff. We did “Lost Skeleton Returns Again” here and a music video for Gnarls Barkley for the song “go go gadget gospel”. That’s just off the top of my head.

Dr. Gorehound: The Chiodo Bros. have done fx on such films as Team America: World Police,Elf,Demon Island,Critters,Ernest Scared Stupid, and Killer Klowns from Outer Space. Can you explain the special fx and make-up they did on those movies?

Frank Ippolito: ACK! That’s lot! They did everything! Hahaha. You’ll have to interview one of them for that, all of those movies were before my time!

Dr. Gorehound: What FX legends do you idolize and respect?

Frank Ippolito: Growing up I had a lot of idols. Rob Bottin, Rick Baker, Dick Smith, Kevin Haney, Greg Cannom…and I have gotten to meet or work with most of them!

Dr. Gorehound: What is your favorite horror or fantasy movie?

Frank Ippolito: Top of the list has to be Carpenters “the Thing”! I love Mario Bava’s movies, and Shawn of the Dead, Young Frankenstein. Lately I have been on a German expressionist kick. To be honest though, I like comedies more than horror! HAHA. Caddyshack RULES!

Dr. Gorehound: You have done some beauty make-up work on famous hollywood starlets like Paris Hilton, can you explain that process to us?

Frank Ippolito: Its strange…the public always has these preconceived notions about what celebrities are like…to me, we are co-workers. As long as we all treat each other with respect an are cool to each other, I could give a sh*t less about what gossip magazines say about them. Paris was easy to work with , didn’t act like a diva, and was very gracious to me and my assistant. For this particular job I was hired on to make Paris look like she’s black. I think she looked more middle eastern, but everyone was happy with the work, so who cares. When we started painting, the producers and Paris kinda picked out the look…they chose from about 6 wigs and a bunch of different skin tone reference photos that I had. I airbrushed on her skin tones with Skin Illustrator, and then Air Craft foundation. Then we did a beauty makeup on top of that and then the wig. It’s kind of fun doing reality shows, I’m on camera in that episode! 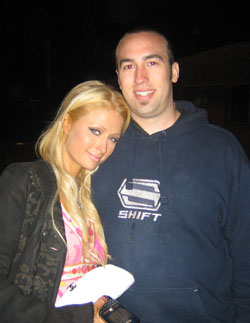 Dr. Gorehound: What is the best advice you would give to up and coming FX students trying to succeed like you?

Frank Ippolito: Start young, and never make excuses! And even though there are some decent schools out there, don’t think that you have to go to school for makeup! I’m self taught and I came out just fine!

Ok thanks for your bloody gracious time Mr. Ippolito!

Okay thats a WRAP From the DOC! Till the next time i have to chop up some left overs for my Demon Dog! Hahahaha…..