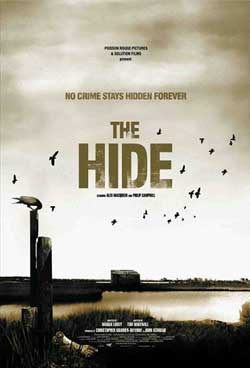 On the windswept Suffolk mudflats creaks a bird-hide, inside which hovers Roy Tunt, a prematurely aged, mildly obsessive-compulsive birder. With one more sighting – the elusive sociable plover – he will have ‘twitched’ the entire British List. Tunt has his shortwave radio, packed-lunch and a portrait of his ex-wife Sandra for company. Suddenly, in the midst of a conversation with Sandra’s portrait, the hide door blows open and a bedraggled stranger – unshaven, edgy and bloodied introduces himself as Dave John, a fugitive from the storm. After a tense introduction, the two men discover that they have a good deal in common, sharing sandwiches, tea and personal exchanges which are frank, poignant and often funny. As the two men begin to form a close bond news of a police manhunt sets them both on edge driving their fragile relationship to a tragic conclusion.

“The Hide” is a great film that I only have one gripe with as far as writing a review about it for “Horror News.Net” but I’ll get to that at the end.

“The Hide” is a great art house kind of psychological thriller, it’s entertaining, intelligent, well written, intense film that is well acted with outstanding performances from Alex MacQueen and Phil Campbell based on the play by Tim Whitnall who also adapted this into a screenplay and is deftly directed début film from Marek Losey. Losey was previously a commercial director, Alex MacQueen is really the only actor in this that’s been in other films -I could totally see him blowing up in a few years from his work in this film though, this is an amazing first performance from Phil Campbell, so it’s really 2 firsts with this film. The entire story is deep and personal based on the interactions of 2 men in a shack, one an escaped criminal who has kind of wondered in from nowhere and the other man is seemingly normal with a few quirks… 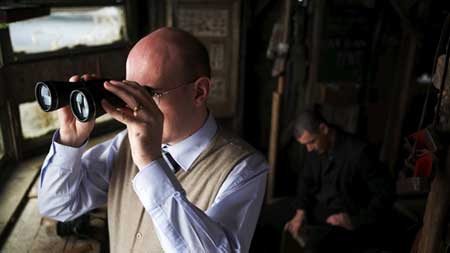 This film is really smart that it uses just two characters and one setting and stays interesting. It really reminds me of say Hitchock’s “Rope” or Linkletter’s “Tape” actually I feel it stays more interesting than “Tape.” Phil Campbell is f*cking brilliant, while the film isn’t a comedy by and far he plays more the metaphorical straight man to the ranting idiosyncrasies given by Alex MacQueen’s obsessive bird talk. The performances are really solid and the characters are totally relatable and well-acted. The film keeps you wanting to know what is around the corner and is highly dialogue driven; in fact I’d have to say that the film is 99.01% dialogue. 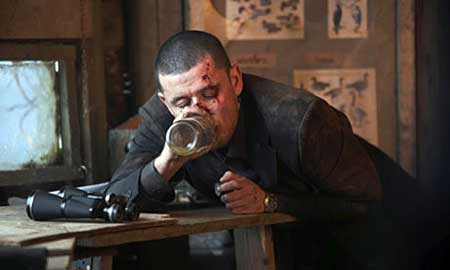 So if you sit down to this waiting for the gore or waiting to see something happen I’ll give you heads up two guys talk about stuff… and then they talk about some more stuff. No car chases, no running to defuse the bomb, no knives or ax murdering… oh yeah, and those 2 guys talking just keep talking… But the conversation will keep you interested, the dialogue isn’t even some flashy Tarintino-esq – pop culture conversation, it’s about relationships and personal experiences… but yeah, this totally worth the 90 minutes of your life.

It’s hard to write a lot about a film that is set in just one location where the only thing happening is a conversation but I assure you this film certainly has a sense of mounting tension and really is worth the time to watch. To the credit of Mark Losey every moment of the film feels like it could happen in real life. 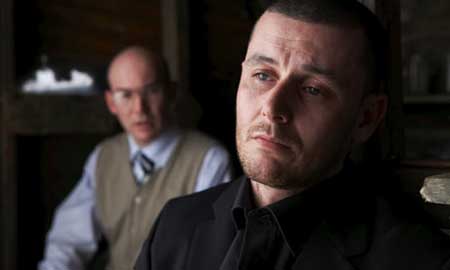 So what is my gripe with this film? Well this website is called “Horror News. net” not “Taught Well Acted Based on a Stage Play British Psychological Thriller News.net.” That is one URL I dread having to remember. “The Hide” is a great movie but it’s just not a horror film. Granted I’ve written reviews before about films that are kind of on the fringe of horror films and this is definitely on the very outside of being a horror film. But it is an excellent film that I totally recommend seeing.