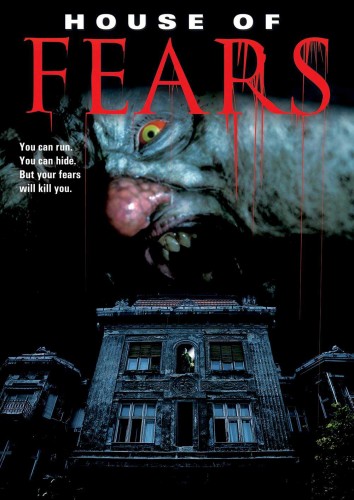 The night before a local haunted house opens for Halloween, six friends sneak in for a few hours of fun. Soon after entering, they find themselves trapped inside with no way out. Their evening of fun rapidly turns into their worst nightmare as they begin to die and disappear in the most freakish of manners. With every effort to escape blocked, the survivors find themselves being driven deeper into the carnivalesque world of terror. Unable to tell what is real and what is counterfeit, they must trust one another, even if it kills them

“House of Fears” may not exactly be an original idea, we have seen variations of this story before, it was done so well that it felt fresh and interesting at times, but from beginning to end it was fun. It’s easy to dismiss the film as a clone, something along the lines of “Waxwork”, but director Ryan Little along with screenwriters Steven Lee and John Lyde, have crafted a solid little movie filled with cheap scares, impressive creatures, solid acting, and some damn fine cinematography shot within the walls of the spookhouse that was downright creepy. This is a great way to spend the night in.

“House of Fears” follows a group of college students out to a party. They are asked by their friend Zane (Eliot Benjamin), who works at the haunted attraction “House of Fears”, if they want a sneak preview. He gathers up step-sisters Samantha (Corri English) and Hailey (Sandra McCoy), Devon (Michael J. Pagan), Carter (Corey Sevier), and Candice (Alice Greczyn) to join him at the attraction. Once they arrive Zane informs them that the attraction focuses on exploiting the fear of death, ghosts, monsters, the dark, clowns, bats, spiders, losing your mind, and sharp knives. Inside, they encounter the animatronic attraction and all is well until they start seeing things and realize that an ancient statue is bringing all of their worst fears to life.

I haven’t seen what the rating is on this film but I am guessing it is PG-13, and don’t let that scare you away. Although I would have preferred to see some more of the red stuff, the lack of grue actually helps the film and allows you to use your imagination a bit. The film is relatively bloodless and I still enjoyed it. For me, that is saying alot. Instead, they focus more on cheap scares, the things that pop out at you and make you jump. All of the effects in the film were practical, no CGI. And if there was, it was done in such a subtle manner that I never noticed. Lots of shadows and some really nice clown make-up are a couple of examples. I hate clowns and this one only helped to cement my own fear. Clowns are f*cking scary…..period. Also, there is a great scene in a house of mirrors type room where our remaining survivors are being chased by a tall, pale, bald man in a suit and the mirrors create a really nice effect.

The cast is relatively unknown. This can either help or hurt a horror film, but this ensemble worked very well together and never annoyed me. They came off as likeable, fun, or even people you may have hung out with. The film focuses mostly on step-sisters Samantha and Hailey, how their relationship is somewhat spiteful and in the face of fear have to put aside their differences and fight to stay alive and overcome their fears. Of course, everyone is your standard stereotype, Carter the hunk, Zane the jokester, Devon is the know-it-all, but what I found interesting is that, at least to me, with solid actors, they don’t feel so one-dimensional and I found myself invested in them, even if only a little bit, which is more than I can say for most the films I watch.

Director Little, this is the first of his films that I have seen, pulled strong performances from the actors while still moving the action along at break neck speed. He trimmed away the fat and gave us a lean film that gets right to the point and once things get rolling, never let up. There was also a walk-on cameo by Supernatural’s Jared Padalecki, and if anyone knows what the connection is, I would like to know.

I am not usually a fan of PG-13 horror films, but after seeing “Drag Me to Hell” and now “House of Fears”, I can say that a film can be scary and fun without an abundance of blood and guts. This film tries to rely more on classic type of scares and still remain interesting. Little and company knew exactly the type of film they were going to make and delivered the goods. This is no modern classic, will not be on anyone’s top favorite list, but it does deliver a good time and you could do alot worse on a boring evening. This one is worth a viewing or two and will be interested in seeing if Little takes on another horror project, he may be one to watch.