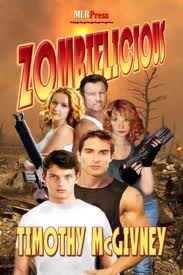 There’s no sense trying to hide it, or trying to tap dance around certainly elements of this book, because some people might find those same elements a deal-breaker and I don’t want to waste their time reading a review for a novel they wouldn’t read anyway, but Zombielicious, Timothy McGivney’s debut novel, contains not one instance of man-on-man love, but at least three, and depending on how you want to count some things, even more.

Of course, it’s debatable how necessary it is for me to make this point, given that with a name like Zombielicious and lousy cover art – and when I say lousy, I mean incredibly lousy – it’s safe to assume the novel would have a limited market anyway, so the presence of some random gay sex was probably not going to have too negative an impact on overall sales. Although, to be fair, if I’m going to point out the gay sex I might as well point up the fact that the novel also contains a couple instances of heterosexual sex, has a main character who was once a p*rn-star, complete with some discussion of her prior career, as well as a bit of special alone time one of the characters has, whilst thinking about the ex-p*rn-star. So, in some sense, this novel has a limited market, but in another, it also has something for everybody.

That is, except for those people who enjoy a good title, or quality cover art. As an aside, I want to reflect on how bittersweet it must have been for the author to find a publisher for his novel, a daunting task in itself, only to have that publisher produce cover art that would fall below the standards of even the least-discerning kindergartner. However, I refuse to pity the author, sitting as he is on a novel published by something other than a print-on-demand outfit, a fact this reviewer cannot say about himself.

But I digress. The story of Zombielicious – god, I gag every time I type the title – is fairly old hat. Zombie apocalypse descends on the world, binds together a ragtag bunch of survivors, some of who don’t hang on to the title of ‘survivor’ for very long. In the spirit of a largely recycled plot, the characters are basically cut from cardboard – most are a bit sex-crazed; generally speak in the same voice and have similar motivations; includes far too many coincidences than should be acceptable in any piece of genre fiction; and features those tried and true slow-walking old-school zombies, not those ridiculous fast-moving freaks from Zak Snyder’s subpar remake of Dawn of the Dead. But, while it has a plot as old as time, it also has those new elements of hardcore gay and straight sex, so really, it’s like retro zombies with a modern twist.

And, as much as I might decry it as hackneyed, I actually found some elements of the book rather enjoyable, particularly, the character of Jill, the ex-p*rn star, working as a nurse in a drug testing lab. She was by far the most relatable and real, which is odd, given she might have been the most far-fetched off them all. Far-fetched or not, I thought her arc in the novel was handled quite well and at the end I must admit I was rather satisfied with how her particular story was handled instead of wishing, as I did with other characters, that she might have been killed off within the first 50 pages.

Of course, little of this discussion actually relates to whether the book was good or not. But even that question is a difficult one to answer. After all, a zombie novel cannot be equated on the same terms as other novels. Being that it contains zombies, it’s not going to be forced to adhere to the same expectations of believability or conceivability of other novels, so while it might seem completely out of place in something by Michael Chabon for one character to unreservedly declare his love for another after merely a few hours of acquaintance, followed by some rousing gay sex, it’s not nearly so preposterous in a novel where that character has just escaped from the torture dungeon of a creepy sadist, largely thanks to the timely imposition of the recently zombified transgender best friend of the very same character.

Believability removed from the framework of evaluation, the question then becomes one of whether or not the novel was successful in accomplishing what it set out to achieve. In that respect, I’d say it was. The book is definitely readable, with believable conflicts between the characters and even though some of those characters are repetitive, the book does create some interesting visual elements, such as when one on character wrings “zombie gunk” from her hair, or another is attacked by a zombie chain gang, or yet another describes just what it was like to have a zombie chew through her ankle.

However, for all its readability, this is a book about zombies that has a relative dearth of zombies. To people who require a zombie novel to be rife with zombies, they might be better served looking elsewhere. The plot, i.e., zombie apocalypse, doesn’t kick in until 40 pages into the book, which is only 200 pages long to begin with. Once the zombies do appear it is only intermittently and I was left with the feeling that this novel really started out as two novellas, one about zombies and the other about hot gay sex, neither of which were novel length on their own, but melded together were. I’m sure that’s not the way this particular novel was written but even so, if it were, it would help explain why there are lengthy stretches of sex followed by a lengthy stretch of zombie-siege, returning again to the sex, and so.

Still, whatever I can say in complaint of the book, the truth is that, unlike after reading any of the dreck by Brian Keene, particularly The Rising and its sequel, I didn’t regret that I’d read Zombielicious. At the end of the day, I’d give Zombielicious a tepid thumbs up, an assessment I’d willingly improve if somehow the book received a less ridiculous name and less amateurish bit of cover-art.