Home | Film Review: The Island of the Cannibal Death Gods (2011)

Film Review: The Island of the Cannibal Death Gods (2011) 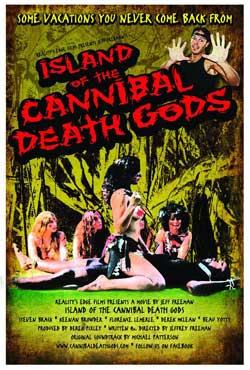 Three men, trying to escape from the prying eyes of the media, book a fishing charter and get more than they bargained for.

Before you sit down to watch this film I have one very serious question to ask you:

Would you like some cheese with your pineapple spiced ham?
With that out of the way let me talk about this cheesy and wonderfully hammy film and I say that with love. Granted I think “Hollywood Chainsaw Hookers” is a classic… But I think in writing about this film I’d rather let the film speak for itself being that it opens with the following:

“The producers, cast and crew would like to dedicate this movie to Roger Corman, Herschel Gordon Lewis, Russ Meyer, Llyod Kaufman and the many other independent film makers, who accomplished so much with so little. It is because of you that 1000’s of others have the opportunity to bring their visions to the screen.” 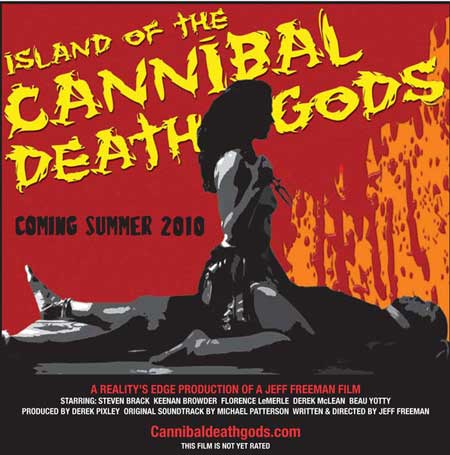 Now I will say that in the first minute of the film it really got to a special place in my heart cause the above statement was followed up by a spear through the back of the head and out the eye. To me, that is endearing.
I’m not going to mince words, and sell you on a false bill of goods here, this is obviously a first movie, and I’m guessing shot in SD with a lot of technical flaws, I mean f*cked up sound big time, some the edits are hard to tell if the director is going for an intentional grindhouse look or there may have been some kind of technical issue. However I give a lot of leeway to a film that opens giving props to: Roger Corman, Herschel Gordon Lewis, Russ Meyer and Lloyd Kaufman, I say leeway, cause with all of those film makers I can find at least one of their movies with GIANTIC technical flaws. 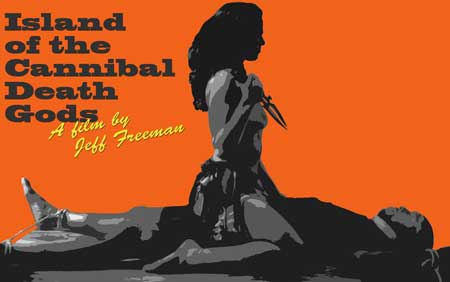 The short version of the plot is an action movie star, his agent and brother in law go for a fishing trip and wind up stranded on an Island with naked (rather semi naked) cannibal women. Really that’s the story, it’s that basic, but in the words of a far greater film critic “the story doesn’t get in the way of the plot.” Now when I think of naked women and the word cannibal my mind tends to move towards Ruggero Deodato and turtle. Or just the word “Cannibal” conjures up the d*ck eating scene from the 2006 Uneathed Film’s “Cannibal” but after getting past the cannibal gore stigma I was able to get into the vibe of this kind of cannibal…

Yeah, I wanted more at the end of this film but I see this film as a strong no budget first and beginning of something. When I say no budget, I really think we are talking in the way under $1,000 range. Jeff Freeman knows his camp and while the film could have moved a lot faster it was fun to watch someone who understand how to make pure trash poetry, and I mean that with the utmost love. Yeah this film needed “more stuff” but it did have solid gore -a nice gut rip at the end, boobs, blood and cannibal women. 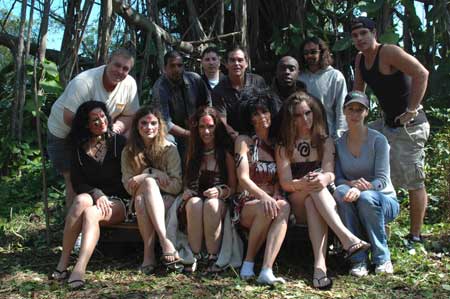 I see this film a prelude, I really want to see what Freeman does next, I feel like he’s starting to grasp onto something. This is a director I want to follow.

The Island of the Cannibal Death Gods (2011)