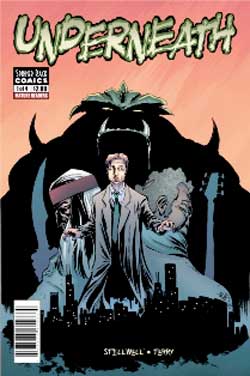 “Before Chicago was a city, before the white man cleared the prairie and swamp to build their roads and towers, there was the pool. The pool had always been. A doorway to another place, a place filled with dark things seeking to enter our world. The Keepers of The Fire kept watch over the pool, keeping the Weendigo, the man-eaters at bay.
Now, the guardians of the pool are the unwanted of society. The ones no one will miss if snatched in the night to be Weendigo meat. Under the city they clash, the man-eaters and the forgotten Keepers.”

Artwork: 4.0 out of 5
I had to do a double take on the cover of this comic to make sure it wasn’t an Image comic. The artwork of Jim Terry really reminds me of something I would have seen in the late 90’s or early 2000’s from Image. His designs on this book look great, and from panel to panel are very consistent. In terms of the monsters they truly rock. My only downside on the art was the coloring. I felt that the book was too muted at times. Some more vibrant colors really would have pushed this book up a level, but it is a small thing to pick it because the overall look it great.

Story: 4.0 out of 5
I think it is safe to admit that I didn’t think book would be this entertaining. The synopsis played it out to me as something that could be interesting but not personally my cup of tea, I was wrong. Stillwell does a great job of building as the story goes along. The recap as to what has already transpired eliminates the need for a prequel, and I had a great sense of what was going on from start to finish. The dialogue was good, but I think could have been a little better because at times I found it to be a little rushed. Overall though I think it comes off very nicely.

Dying Breath: 4.0 out of 5
I didn’t know what to expect from this title, but I was really happy I got a chance to check it out. The artwork was great from panel to panel, but the colors could have upped their game a little more. Apparently, and spoiler alert, all it takes to decapitate a troll is a guitar swing to the head, I am still enjoying the visuals on that. The writing moves the story along with some great action and descent dialogue. Underneath is not just a book for C.H.U.D. fans, all horror comic fans will like this one.

If you would like to buy or know more about Underneath you can find it at www.underneathcomic.com/