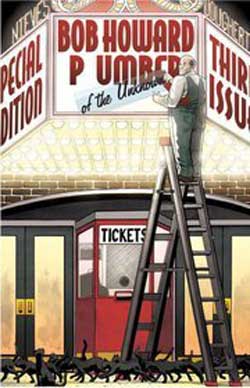 “In the third issue of Bob Howard: Plumber of the Unknown, the everyman monster hunter finds himself finds himself battling a nemesis who goes undercover, and introduces two new supporting characters. Story and art by Dan Dougherty, script by Rafael Nieves. In the second story, Bob takes a job as a movie theater usher, not realizing that he is going to be the star in his own creature feature! By Nieves and Dougherty.”

Dying Breath: 4.5 out of 5
I’m beginning to ask myself how many voices Rafael Nieves hears in his head, because this man can write an accent! Good lord ol’ mighty how does it get done so damn well? The first story in this issue could possibly be my favorite Bob Howard story yet. It had me cracking up from start to finish. The second story though seemed to be a little rougher around the edges, and I really think it was because of having to come up with a way to get all 60+ contributors into the book. However nothing is taken away from the whole. The writing in this issue holds up so well with the previous 2 issues. Dan Dougherty’s artwork is again GORE-Geous, and no it is not just because my glorious head is in the book. To be able to do a 4 page spread with 60+ original characters is amazing in its own right, but still the gray’s in Dan’s work make it so unbelievably great. Bob Howard is a comic book for the every man and horror fan alike, it should be in your read pile as of yesterday.

If you would like to buy or know more about Bob Howard: Plumber of the Unknown #3 you can find it at www.facebook.com/bob.howard.plumber 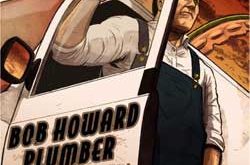