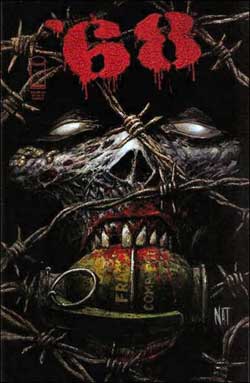 “On February 13, 1968, during the darkest days of the Vietnam conflict, the gates of hell opened wide, unleashing new, hungry life into the countless war torn dead. The horrors of war take a back seat as an American tunnel rat crawls into a Viet Cong warren turned undead slaughterhouse, rotting snipers fire their final bullets from treetop perches and freshly filled body bags twitch and rise from the slab. There are zombies in the razor wire…

Horror comics creators Nat Jones, Mark Kidwell and Jay Fotos return to the jungles of Vietnam, expanding the zombie epic started in the original one-shot “’68” with this four-issue mini-series of undead military horror. Each issue features multiple covers by Jones and Fotos, full 22 page stories in series continuity and a bonus 4 page short that expands on the zombie-infected world of 1968 by horror titan Tim Vigil.

Artwork: 5.0 out of 5
GORE-Geous! From front cover to back cover and then the minor ink left on my hands, this book is drop dead GORE-Geous! Being a fan of both Jones and Vigil makes it easy to understand why I like the images in this book so much, but the secret weapon is adding in one of the best colorists in the game, Jay Fotos. Panel after panel I was picking my jaw up off the floor, but it all really came down to one scene and I won’t spoil it, but it involved a tunnel and some hands. A job well beyond done here guys, just flat-out perfection.

Story: 4.5 out of 5
For time period that I really only know through movies and television I have to give some big props to Kidwell here, because it was spot on what I have seen before. The dialogue comes off so well, that I have flashbacks of watching Platoon and Apocalypse Now. The pacing was great, but again it shined so well in the horror elements seen and even not seen. So much for one comic, and then there was a back story!

Dying Breath: 4.5 out of 5
There may be a decent amount of zombie books to choose from, so take it from the Horror Head, that this is one you can’t pass on. The artwork is stunning, the writing is spot on and well that all you need to know before you but this and write the exact same review. This is the perfect combination of an American war and great horror genre. I want more right now! I MEAN RIGHT NOW!!