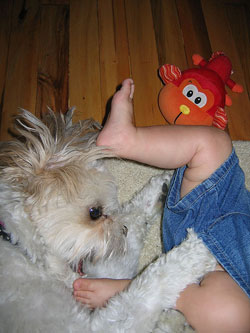 Happy New Year and Some Dead Babies Too!

Welcome to yet another year my dear readers. That is unless you have died, then if you are dead and still reading this article that means you are the undead and should give me a call on my cell phone because I have some things I need you to do for me.

If you have not, well either get your eyes checked or ask the doctor for a cat scan. Why has the name changed you ask? Allow me to answer. It is a new year, a new beginning for the column, and I have lost interest in this sentence so read on. Just like those replaceable bodies you copulate with and claim you love, the flesh is the same and only the names change. Onward and upward, I guess.

It is the hideous year of 2009 and what does that mean? Numerological interpretations suggest that 2009 is a numeral equating to eleven or one, which pretty much means sh*t because numerology is a bunch of just that. No I am just kidding, numerology is my number one and number four top interests depending on how I spell it according to what my Chinese astrological mood tells me on my placemat before my eggrolls cover it. Besides, numerological mysticism is fascinating and true because that guy with the robe and staff said so. Enough digression.

With the coming of each New Year manifests hopeful emotional and psychological sunshine along everyone’s personal horizon. January 1st is that time where we begin our initial downward spiral away from those constructive resolutions we made before the stroke of midnight. I am sure everyone is familiar with those moments upon New Year’s Eve where we make promises of change so to alleviate any guilt and responsibility for the habits and practices, or lack thereof, from the previous year. You know what I mean do not deny it! That usually occurs right before you make that drunken “mistake” of illicit sexual activity with someone you hardly know or can stand. At least you can stand while both of you are wearing clothes and not connecting within a universal nexus of genitals and ejaculating body fluids. As they say, “once the nipple makes its appearance, all bets are off.” They don’t really say that, I just felt like typing it.

Alongside all of the hopefulness of a new year is of course its shadow aspect, its more realistic aspect. As the body of a New Year stumbles in (usually hung over) with all of its future, potential, and hope it also drags alongside its fresh flesh a clinging parasitic sentient tumor of lies, deceptions, and delusions. In as much as things can change for the better within both macro and microcosmic natures, some things will never change.

What the hell does all of this have to do with the nature of this column, how horrible the real world is you ask? Well if you stop asking such questions and keep reading you will find out.

This edition of Horrors of Humanity deals with something not so much horrific as disgusting and let’s face it folks, life is often about as beautiful as the leftovers of soft baby body parts through a meat grinder. And there you have it my dear readers, the subject for your weekly enlightenment: A disgusting baby story (not through meat grinders I am afraid).

Welcome to Colorado Springs, home of big snowy mountains, refreshing mineral springs, and a freak baby right out of the film Basket Case because he was born with a foot and various tiny body parts embedded in his brain! Yeah! Sick! Little Sam Esquibel had surgery to remove a tumor (on his parents request not his, he’s a baby you idiot and can’t talk yet never mind request surgery!) and what they found astonished everyone present. They found that inside the tumor were tiny body parts! Well as Arnold Schwarzenegger once said in Kindergarten Cop, “It’s not a tumor! It’s my one-legged one-armed gimp baby brother Jose!” See the directors cut for that scene.

It’s a miracle of modern science and “one for the books” the doctors declared. Here’s an interesting factoid that the article reveals in it comments. If Colorado Amendment 48 had passed, this “Human Life” inside the infant’s brain would have been a “Person” with full legal rights that any other person would have. There’s a lot of joke potential in that sentence but I will refrain from being rude and insensitive as I am a caring socially sensitive individual.
If I had an extra hand and foot on my head the wonderful things I could do! I would let them grow through and: hop on my head and clap my other two hands, shake hands and eat my chimichangas and let’s see, I could perform intercourse, stimulate the clitoris and involve the anus all at the same time and not fall over or get leg cramps! Now that’s perfection! 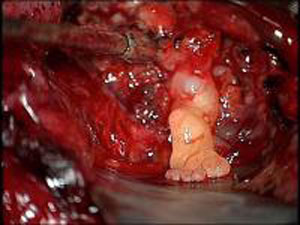 Feel free to read from the source if you want a more sensitive coverage of the story you liberal hippie environmentalists!

Here is a quick collection of other fun baby stories since we are on the topic:

A three-year-old suffered second-degree burns on his legs and ass from sitting for days in a diaper full of sh*t. As the report states,

“The boy’s father, Jesus Rodriquez, 34, of Greensburg, has been arrested and charged with aggravated assault after police discovered the 3-year-old and his 4-year-old sister in an apartment filled with soiled diapers; smeared feces and garbage.”

My advice to Jesus, the guy NOT the deity is, stop feeding your parasitic future Wal-Mart associates cans of chili and 25 cent frozen burritos. Maybe then you can ignore them for longer periods while dealing drugs and collecting welfare checks because it’s the spicy foods that hurt the anus.

To continue our happy New Year newborn thread, in Santa Rose County Florida a three legged dog named Coco (sounds like a country song) was found carrying a dead baby in its mouth. Well my comments are thus; Studies determining if dead babies have more iron and vitamins then Alpo are still out and playing fetch with a three-legged dog is just cruel. No it’s not, it’s funny but I hate dogs.

Oh and speaking about dead babies, as we enter 2009 I know the question on everyone’s mind is how many dead babies were there in 2008! The United States ranked 29th on the list of infant mortality last year. Nearly 7 out of every 1000 live birth babies die in the US and 28,000 die before their first birthday! Fun stuff I know… 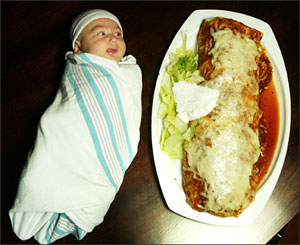 Oh yea, one more thing for you with weird breast fetishes, Facebook is banning images of chicks breast-feeding. It’s sparking lots of protest but that’s fine with me, the ban not the protest. I want my tit shot baby free and lactose intolerant.

That’s it for today my dear readers because I have post holiday jet lag, an impending lower intestinal disorder brewing, a bottle of whiskey calling me (it really is! It calls me Necronigglejiggle!), and I just don’t care anymore about dead babies today.

Have a great life but have a better death!