SYNOPSIS:
“An alien being with the power of invisibility lands in Santa Monica. Killing two people who attacked him due to the menacing appearance of his spacesuit, the creature takes it off while being pursued by government authorities.” (courtesy IMDB)

REVIEW:
Some of my more seasoned readers should remember director Billy Wilder as a filmmaker whose incredible career spanned more than sixty films over half a century. Regarded as one of the most brilliant and versatile artists during Hollywood’s Golden Age, he’s one of only five filmmakers to have ever won Oscars for producer, writer and director of the same film. With heavy dramas like The Lost Weekend (1945), romantic comedies like The Apartment (1960), and even a couple of Marilyn Monroes under his belt, Wilder’s reputation as an artist will no doubt remain secure for generations to come.

This week’s film, unfortunately, is not by the great Billy Wilder, but his lesser-known brother, Willy Wilder. While Billy was directing William Holden in Stalag Seventeen (1953), brother Willy was wandering around Griffith Observatory shooting the obscure science fiction thriller Phantom From Space (1953), with typically lazy dialogue by his son and collaborator Myles Wilder, who fell even further from the tree.

But if you’re a fan of fifties science fiction, Phantom From Space is definitely worth seeing at least once. I’m not suggesting this is some sort of forgotten classic – it’s very much a B-grade film, albeit one that has a few good ideas. The acting might be flat and the special effects are rather cheap, but what it does have is lots of stock footage of jets being scrambled and high-tech radio cars with gigantic aerials – they’re a lot of fun, especially if you turn it into a drinking game like I do.

I’ve already established director Willy Wilder’s place in the cinematic universe – even his own brother Billy described him as “A dull son-of-a-bitch” – but what of the other talents involved? I’ll warn you now, they’re few and far between. The two lead actors, Ted Cooper and Tom Daly, found equal amounts of fame and fortune, which is a nice way to say Phantom From Space represents the career high-point for both of them. Ted appeared uncredited in about fifteen films, while Tom mostly played un-named authority figures.

Harry Landers, who plays Lieutenant Bowers, fared a little better in the acting stakes. Harry is best known in the USA as the spokesman for Nescafe coffee in television commercials dating back to the sixties, but you might recognise him from the medical drama Ben Casey, in which he had a regular role as the good doctor’s sidekick. He also had a small role in the Alfred Hitchcock film Rear Window (1954), but that’s about as good as it got for Harry Landers.

Working our way up the thespian food chain we come to Jim Bannon, who plays the police sergeant imaginatively named Jim Bannon. Jim was a regular in Hollywood westerns during the forties and fifties, and is probably best remembered as cowboy hero Red Ryder (1949). Switching to television, he appeared westerns like Mackenzie’s Raiders, Tales Of Wells Fargo, Lassie, and Seahunt. He was unlucky enough to become the first husband of Bea Benaderet, Jethro Bodine’s mother in The Beverly Hillbillies and the voice of Betty Rubble in The Flintstones. Now that I think about it, that’s probably what killed him.

Rudolph Anders, who plays Doctor Wyatt, was a German character actor who began making films under the name Rudolph Amendt. He moved to Hollywood in the early thirties when that evil vegetarian Adolf Hitler came to power. In 1938 he changed his name again to the less-Germanic Robert Davis and stuck with it throughout World War Two playing various Nazis but, because of his small stature and soft voice, he wasn’t a terribly convincing villain. After the war, he changed his name back to Rudolph Anders and appeared in almost a hundred American films until his retirement in 1968, including The Great Dictator (1940), To Be Or Not To Be (1942), Spy Smasher (1942), A Star Is Born (1954), The Snow Creature (1954), and Frankenstein 1970 which, despite the title, was made in 1958.

Possibly the most interesting name involved with the making of Phantom From Space is that of Bill Lava – whose name doesn’t really describe his nature – the musical muggins who worked on the Warner Brother Looney Tunes and Merrie Melody cartoons from 1962 onwards, replacing Milt Franklyn. Bill was responsible for music in eleven Road Runner cartoons on a tiny budget, so only the first one had real scored music. The other ten used a set of generic musical cues which didn’t follow the action closely at all. He also composed the music for The Pink Panther Show, adapting Henry Mancini’s themes to closely follow the character action, but the one piece of music that Bill Lava will be remembered forever for is the theme from F-Troop.

Phantom From Space starts out like any other alien invasion movie, but it eventually becomes obvious that the alien isn’t really an invader at all, he’s just misunderstood…and nude. It also leaves many questions, a nasty burn-mark on the floor, and the authorities wondering if they could have handled things a bit better. A bit like Ridley Scott’s Alien (1979). Phantom From Space isn’t going on anyone’s Greatest Movies Of All-Time list, but it certainly is an entertaining slice of fifties science fiction. One of the great attractions of films like this is the technobabble, and Phantom From Space has some real whoppers, like when the chief scientist reasons that the alien must be a silicon-based life-form: Glass is made of silicon, and glass is transparent, therefore the alien should be invisible…and weigh the same as a duck. And it’s on that pseudo-scientific note I’ll bid you a good night and look forward to your company next week when I have the opportunity to simultaneously raise both hackles and cackles with more dreadful dross from the drains of Los Angeles in another trouser-moistening fear-filled film review for…Horror News! Toodles! 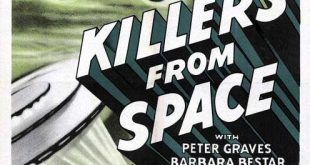