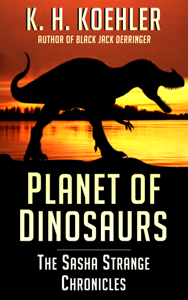 Planet Of The Dinosaurs

Just days before she’s to be married to the odious Lord Quinn, Sasha’s latest experimental device backfires and opens a dimensional gateway between our world and a prehistoric planet. What’s worse, it transports not just Sasha, but Sasha’s childhood friend Toby and the unforgivably arrogant Lord Quinn himself to a primeval jungle.

Before you can say ‘Stegosaurus,’ Sasha and company are being pursued by the apex predator of the time, a flesh-eating Ceratosaurus which is ravaging the land.

And if that isn’t bad enough, the Planet of Dinosaurs is home to the Sen, a race of telepathic bat-like people who want Sasha to kill the Ceratosaurus before she depletes their land of prey, or she may never see Toby alive again.

But how does one kill over thirty feet of primordial teeth, hunger, and rage? 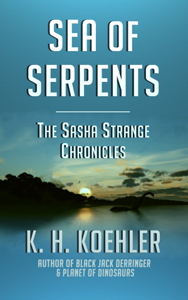 Sasha, Toby and Quinn continue their quest to find the legendary Valley of Song, which just might prove a way home for them all. But along the way, the travelers encounter all new dangers, both on land as well as in the sea. A tribe of savage primitive humans proves almost more dangerous than the giant beasts that hunt them.

Plus, Sasha must resolve her feelings for one of her companions, one companion will betray them all, and one will be lost to the Planet of Dinosaurs forever!

Will any of the travelers make it back to London alive? 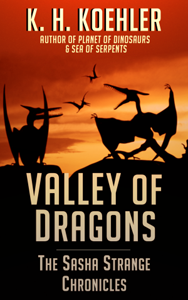 In the conclusion of The Sasha Strange Chronicles, Sasha, Quinn and Dr. John Ulysses have finally reached the Valley of Song, only to discover they have but days to open a gateway home or risk being trapped on the Planet of Dinosaurs forever! Unfortunately, the Valley is protected by angry flocks of ravenous pterosaurs who will kill and consume anything that moves.

In the midst of bloodshed and chaos, Sasha and John must work together to create a new Tuning Machine, further straining the already fragile relationship between Sasha and Quinn. And if that isn’t bad enough, She is moving ever closer to a final confrontation…

Who will live and who will die?

What boy growing up in America doesn’t or didn’t love dinosaurs? I mean, when I was a child dinosaurs were in my blood, one of my favorite subjects. Sir Arthur Conan Doyle’s “The Lost World” cemented that fact at a very young age.

Then along came the late Michael Crichton’s “Jurassic Park” and “The Lost World” and my love for dinosaurs was rekindled as an adult.

K.H. Koehler’s “The Sasha Strange Chronicles” again has rekindled the awe and love I have of dinosaurs, the inherent danger and terror they bring and the adventures surrounding the world they live in.

“The Sasha Strange Chronicles” is a full blown dinosaur extravaganza, with interesting and believable characters, a fully realized new dinosaur world with inhabitants that are fresh, exciting and a hell of a lot of fun.

This trilogy brought me back to the halcyon days of my youth,  where dinosaurs ruled my world and everything in it.

The story centers around Sasha Strange, a somewhat strange teenage girl of her era. She is more interested in her inventions than finding the proper suitor to marry.

One of her inventions goes horribly wrong and transports Sasha, her latest suitor Lord Quinn and her best friend Toby to a world of danger, thrills and above all else dinosaurs.

Once in this new and malevolent world, they must overcome their differences and work together to survive. The interaction between the main characters was fascinating, the self discovery each one undertook and the inner strength that was summoned by each one to help overcome the predicament they found themselves in.

I have always liked K.H. Koehler’s fiction, “The Sasha Strange Chronicles” only reinforces the fact that she is a great storyteller. She is not afraid to try different subjects and brings her unique storytelling abilities to bear with a simply stunning trilogy.

Use the links above to order this fabulous new dinosaur adventure, penned by one of my favorite writers, you will not be disappointed.