Home | The Brain Dead Guide to the Zombie Apocalypse

The Brain Dead Guide to the Zombie Apocalypse

Disclaimer: Result of death during Zombie Apocalypse after reading this guide may still occur. Author has no liability for reader’s safety.

Hiking to the heights of Bear Brooke in the middle of the night, little Sammie and her boyfriend Joe are looking for a fun and interesting experience. Everything in this whole park is closed, not a human is in sight. But wait, Joe’s ears catch something low and baritone-like.

“What was that?” He stopped his feet in place and listened.

“Nice try, Joe. You’re such a tool.” Sam giggled and kept walking. As she ascended up a tree covered hill, a dark body emerges from the thick brush and attacks her. She screams and tries to push the attacker off of her. Joe watches this situation from afar and immediately blazes towards them with a large branch. Joe mercilessly cracks the offender in the back with the tree-branch and the mugger falls. 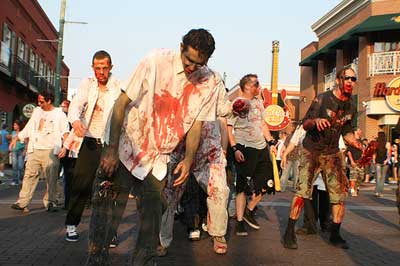 “What the hell is that guys problem?” Sam asked, almost weeping.

“probably looking for money, or a good time.” Joe shook his head. Suddenly, the attacker stands back up and throttles into Joe. Joe flies back and into a large tree behind him. The attacker again wails into Sam by pushing into her and landing her hard on the ground. Watching this all from behind, Joe notices that the crazed attacker has two compound fractures and part of his spine is sticking out of his back. Joe remembers something from a movie he had seen called “Night of the Living Dead,” but he had just ignored it. Joe lays against the tree and watches helplessly as Sam is devoured by the undead creature.

The above situation could have been avoided, if proper knowledge and techniques were used. The world is filled with knowledge in every pocket of air that surrounds you.. Some smarts can only be acquired through being taught, while others are just common and can be gained through little to no application of will. The art of zombie defense has been handed down ever since black and white television emerged. Movies that had depictions of humans out on the limb using their last efforts to thwart the walking menace just to live on another day. In order to explain to you what you should do in such a situation, I will now type out a scenario of a zombie attack in my world. 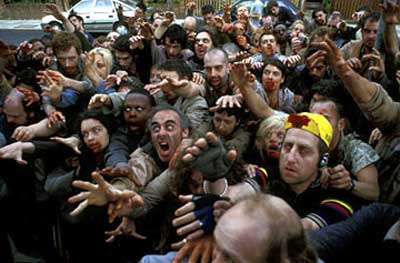 The clock in my room hits 3am, as I lay up in bed on my laptop, researching. My nose twitches a bit and my eyebrows arch. I smell very intense and heavy waves of burning. It smelled like a thousand trees had been thrown into a pile and turned into a bonfire. I immediately headed out the door to check what was going on, as the fire department was right down the street and I heard no sirens. To my horror I see that the sky was a bright red color and the moon was torn into hundreds of brilliant white pieces across the sky. As I look down the streets I see bodies shuffling on the hills and screams in the distance. I breathe heavy and think to myself, “this is it.”

Immediately I think “supplies” and head back in . Equipment and provisions are number one when it comes to a zombie apocalypse. I look for canned food, bottled water, and any other dry food I can find. All food must be easy to prepare and hard to spoil, as you will be out and not know when to return. I tap my watch and make sure it is still working, as time keeps you more aware as to when the sun will rise and the sun will set, and that can be very important. Flashlights are also on the top of the list as they will keep you aware of even the darkest surroundings. I emphasize even using a headlamp, which are hands free and very useful. Other tools of use are fire starters, scent covers, and lots and lots of batteries. 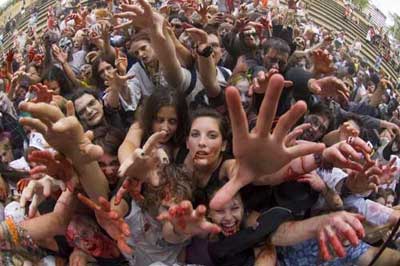 Let’s now move onto offense, because this is one of the biggest areas that can save your butt. Look for any weapons that you may have put away somewhere in your house. Shotguns are so important in the case of zombie attacks. As, with a shotgun, one shot can destroy the entire head of a “walker.” Shot guns I would suggest for close up attacks when you may be cornered . What about for melee attacks you may ask? If there are hordes of the zombie menace and you are by your lonesome, automatic weaponry is key. Spray from side to side with your automatic weapon of choice, but aim up, because you’re going to want to hit the head, which I’ll explain later. Let’s say that you are so close with the zombies that you can’t use even the shotgun. Pull out that katana that you had in your pocket, duh. Swords are excellent for combat too close for comfort.

There’s no good offense without a good defense, so let’s move onto protecting yourself with what you wear. I can’t tell you how many times I’ve seen zombies go for the neck. For your own sake and for the sake of not grossing out your friends when your neck is being torn out, please wear a neck guard. You can often buy a neck guard at a paintball store. Paintball stores can be highly efficient for all types of zombie protection. You can also buy an interesting looking paintball helmet for good zombie protection, but they are prone to fogging up or ruining peripheral vision. You need heavy gloves that grip, heavy amounts of sweatshirts, and even snow pants which are thick and slippery and hard to grab onto. I also suggest wearing large boots with spiked grip bottoms for stomping on the faces of the undead
. 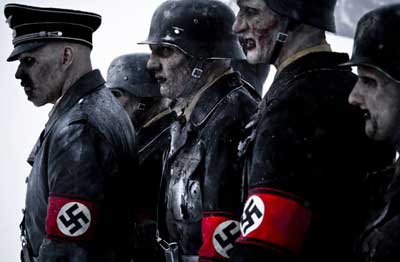 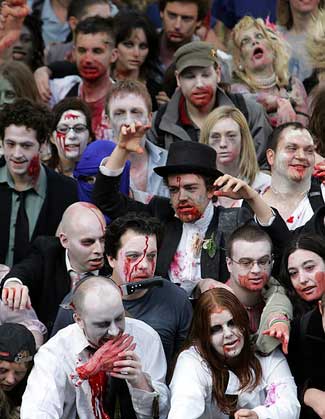 If you want to be prepared all the way to the drop of a pin, you can endurance train. Try jogging once a night and drinking lots of water. I sure as hell don’t do it, but it would be good. There are even survival camps you can go at and train for stuff like this. They teach you to survive with little or no resources in an emergency. If you’ve ever been in the army or the boy scouts, both will be quite helpful when the zombies come.

Let’s get to the whole point of this essay, I’ll put myself in an encounter with a zombie. Three walkers approach me from different directions in an open field. In order to be successful you must understand the anatomy of these corpses. Most are stricken with a body stiffening after-death plague called “Rigor Mortis.” Rigor Mortis is the stiffening of a corpse after death, which means, any body that has died, even if it so happens to start walking after death, should be slow moving. This is contrary to some recent movies that show zombies running. As the zombies approach me I remember the code of all zombie hunters “Shoot the head, the brain is dead.” That is all you have to know. In order to destroy the living dead you must destroy the brain. They come too close for comfort since I’ve been typing so much in between so I wield the steel. I do a 360 degree turn and with one stroke remove all of their heads.

It’s come to my attention in these last few years, zombies are actually becoming able to perform some simple tasks. I have seen zombies with the ability to hold and use a weapon, which is not a good thing for us humans. One thing that the zombies do lack is the strength to lift and carry the weapon properly. The ability for skillful aiming is also not apparent in these creatures, so it’s unlikely that they’ll hit you even when they do shoot at you. In some cases I have seen zombies communicate with one another and express wants with one another, I won’t go into detail with this, just know that they do have some speaking ability. (Groaning)

You have two choices, choose to learn proper techniques, or prepare to be torn apart. If you’re cornered and about to be devoured by the undead, make sure you always have a gun with one bullet in it, because sometimes that bullet will save you excruciating pain and quicken the process of your own death. If you’re ever in an apocalyptic situation, remember what this guide taught you and maybe you’ll live. Maybe you will become stronger because of it and survive through the death. Maybe you’ll die anyway, but read my disclaimer in case of that, I’m not liable.

The Brain Dead Guide to the Zombie Apocalypse