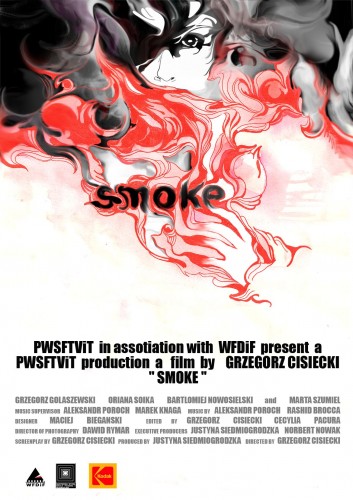 The story of a person who became the captive of surrealistic madness.

My favorite person in the world (My Boss) asked me if I would take on some shorts for review. I thought to myself “Why not”? I’ve reviewed them before & discovered that there is some fantastic talent out there making some incredibly entertaining short films. So what’s the first one I get to review? Well it’s a short film from Poland called “Smoke”(“DYM”). And it is eight minutes of….something.

In all honesty, this is impossible to review as a film because it’s not a film with any kind of plot. It opens with a young man in a room getting out of bed. Looking out of his window wistfully for a few seconds he then returns to the bed where there is a small tape recorder waiting for him to turn it on. Once he hits “Play”, the film turns into a series of images. Images of him acting as a driver for a large man eating berries in the back seat, red juice dripping down his chin. Images of the man with a beautiful woman straight out of a “Chanel No.5” commercial. Images of the man in a club with a gentleman smoking a hookah. We are also treated to images of two women kissing passionately as another watches, a woman with a long scar down her face, another man in a club with a woman discussing something & a woman wearing a reverend’s garb as she puts the tape recorder into a plate that seems to be filled with blood.

The only links I could detect between these images is that the color red is on display in one way or another in almost every scene (Nails, Dresses, Blood, Shoes, Lights) and there’s lots of smoke. Lots & lots of smoke. If there is a meaning to any of this, I’m not ashamed to admit that it’s way over my head. It plays like one of those meaningless fragrance commercials I’ve seen on TV. I’m not saying that as if it’s a bad thing though. It’s beautifully shot & all the on camera participants are suitably sullen & pouty. I just don’t see the point behind any of it. The director had a vision and it’s really nice to look at if nothing else.