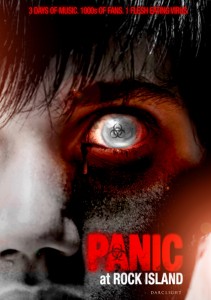 Panic at Rock Island is set on an island in spectacular Sydney Harbour. Under the hot summer sun, a lineup of top acts play for music fans from around the world. It’s all idyllic until unimaginable disaster strikes when a deadly virus is discovered on the island. Its symptoms are shocking and it brings swift and painful death. (from IMDB.com)

Summer music festivals are the highlight of youngsters’ enjoyment of outdoor activities in the warmer months. When a show takes over an entire island for a day of partying and listening to their favorite bands, teenagers relish the fact they have a body of water between all moderation from their parents and party hard. Unfortunately in Tony Tilse’s Panic at Rock Island, the Rock Island Music Festival is foiled by a deadly rogue virus engineered by the military for warfare, entrapping the infected concertgoers on what they thought would be a safe retreat.

Panic at Rock Island begins six years prior to the films current setting in an underground tunnel, with soldiers staking out various dead bodies lining the tunnel. The film cuts to the present, where Arianna(Zoe Crammond) and her guy friend Zed(Eli Kent) go on a wild adventure on Rock Island into an underground tunnel(which is the same one from the beginning of the movie.) They find a bloodsoaked man wearing all camouflage, and escape the tunnel to be rescued by stagehands that ensure the teens will be safe on the island with them. Arianna confesses that the two found a body of a barely surviving man underground, and the cops come in to retrieve the body. The hospital scene is gruesome when the doctors try to save the man, as he vomits up black blood and eventually passes away.

The second storyline of the film involves the Quinn family, who is ran by a very strict father Jim(Grant Bowler) keeps a stern eye on a music lover son Elmo(Christian Byers). Jim’s wife Denny(Dee Smart) is more lax with Elmo, and allows him to go to the music festival for the weekend when Jim forbids him not to. Jim works for the state as a public safety officer, and he is shown being buried in grief when foreign musical sensation Cobra Zane comes to town. His daughter Nina(Jessica Tovey) is working as a security officer on the island, and his concern for her is portrayed as he calls her often to check in on her.

Jim goes into work, and a female coworker approaches Jim about the virus that the man found from the underground tunnel is carrying. She stresses that most of the doctors and even herself were infected with this level 4 deadly virus, and she must do whatever it takes to figure out what the virus exactly is so they can find a cure. The festival has already started, and Zed sadly caught the infectious virus from the body discovered in the tunnel. He begins vomiting profusely, and Arianna seeks help from the concert first aid station. More and more people become sick, and there are scenes of vomiting crowd surfers to fans lying on the ground slowly fading away.

After the island becomes quarantined, Denny finally tells Jim that their son Elmo is also on the island along with Nina. He urges the employees at AVP(an infectious disease lab) to identify this virus infecting all the concertgoers, and undertakes the task of saving the lives of as many innocent victims as he can.

Tony Tilse’s Panic at Rock Island has various disturbing scenes of the virus-ridden concertgoers, as they vomit anything from black blood to contents of their stomach. The movie interestingly enough was a made for TV, and was shown on Australian cable networks. The strong family bonds between the Quinn’s and the love story between Ari and Zed solidify the movie’s storyline, and shows what lengths people will go to save the ones they love. If you have seen one rogue deadly military engineered virus movie you have seen them all, and Panic at Rock Island does not provide much difference from the rest.