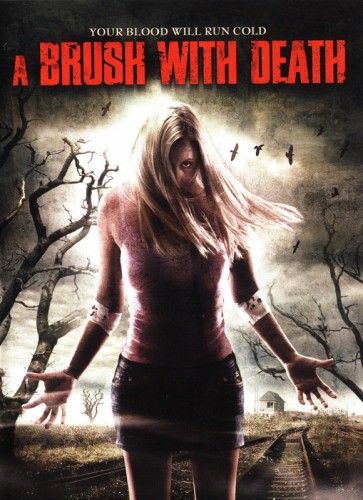 Five high school cheerleaders drive out to a rural mansion to spend the weekend. They hear a thirty year-old urban legend about a young boy who killed his family and used their blood in his juvenile artwork. While exploring an old farmhouse on the property they discover that the boy never left his home and has grown into a sick and twisted man. (from IMDB.com)

When a jeep full of high school cheerleaders ventures out of the city comfort zone they are used to, this can mean plenty of underage drinking and getting mixed up with strange country folk that can only lead to problems. Brad Wiebe’s A Brush with Death is a horrific tale of what happens when five young woman get too trusting with the country dwellers by a vacation cabin they stay in, and learn a lesson that not all guys with good old country hospitality can be trusted. 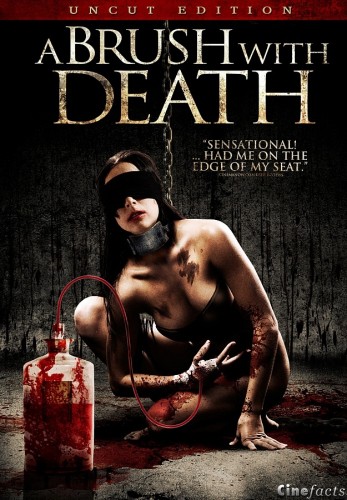 A Brush with Death introduction includes a disclaimer stating that the “film is based on true events,” and blood is shown being drained via medical tubing into jars. Amber(Seanna McDonald), Megan(Missy Sturges), Samantha (Lily Vu), Hillary(Nikki Cordell), and Candice(Ali Thurlow) are focused on next after the credits, preparing a weekend trip at Hillary’s uncle’s place. They kiss their parents goodbye, and are on their way to freedom and plenty of partying. Unfortunately to their dismay, the jeep runs out of gas, but luckily a truck from the service station up the road comes rolling up carting a stuttering but attractive Caleb(Max Taylor) and his creepy boss Walter(Ted Esquival.) Caleb and Walter are immediately classified as evil beings, when Caleb flashbacks to a time where they tortured two vagabonds that Caleb picked up off the street.

Eventually the jeep is up and running again and the girls make it to Hillary’s uncle’s secluded luxury house. They immediately start partying, and things spice up when Rankin(Nicholls Melancon) crashes their pool party, and enlightens the girls about the legend of a creepy haunted house down the street called the Rue House. This lures the young, curious girls into planning to stay the night there the next night with Rankin. They continue the party from the pool into a seemingly harmless game of Truth or Dare, and the night ends with Candice missing. 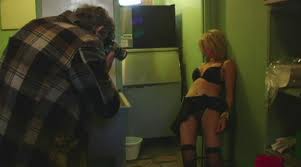 To compel the viewer into the mystery of the haunted house, there are routine flashbacks showing what happened at the Rue House where a young Ronnie(Cody Kinney) is egged on by his older brother Michael(Scott Chedester) to kill animals and even his father. The back story assists the viewer into have a better awareness why the girls should stay away from the house they are so intrigued by, but of course they are still motivated to investigate the mysterious flat. The day they are supposed to spend the night the Rue House, Samantha does a little pre-snooping with Rankin, and also becomes missing. Meg and Hillary get concerned after Samantha never returns, and go to find her and soon come up missing also. Caleb ends up seeking out Amber when the rest of the girls show up missing, and when Caleb leads her to the Rue House to discover what had happened to her friends, the sick past of the deranged Ronnie comes to life, and Amber must find a way to escape before ending up like her friends in his demented grasp.

A Brush with Death is a mysterious horror flick that keeps the viewer guessing to the very end what relationship the strange guys the girls run into on their vacation have, and is easily resolved at the end. The five high school girls are definitely eye candy to the general male horror viewing public, but they also cast two young attractive gentlemen to appeal to the female horror viewing public. The Truth or Dare game part is kind of cheesy, but entertaining when Rankin is dared to take body shots off the three other participants. There are parts with blood being drained from victim’s bodies, but no overly gruesome scenes of dismemberment or rape that usually falls into this genre of horror films of innocent teenage girls stepping into unknown territory. 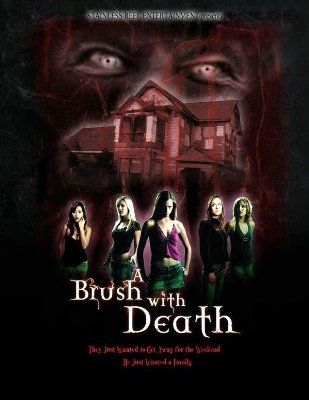 Brad Wiebe’s A Brush with Death is a new age urban legend type tale that entertains the viewer with another story about how the innocent should not mess with an unfamiliar locale. Released in 2010, the movie does not bring anything new to the table as far as uniqueness in young teenage cheerleaders being creeped on by country bumpkins, but is an interesting story to keep the viewer compelled to the mysterious ending tying together the loose ends of the legend of the Rue House.