Call of Duty: Black Ops’ Rezurrection map pack was released for Xbox 360 on August 23, 2011, and it will release on a later date for Playstation 3 and PC owners.

The Rezurrection map pack is the first Black Ops map pack to be entirely composed of Zombie mode maps. For those of you that don’t know, Call of Duty Zombie mode puts up to four survivors in an enclosed area, and then it sends endless waves of the undead after them. You cannot win at Zombie mode, and there is no escape, although other parts of the maps can be opened and explored. The object of zombie mode is to accumulate as many points before you die, and you can attain many power ups and powerful weapons along the way to help you do so.

The Rezurrection map pack features 5 Zombie maps, but only one of them (Moon) is brand-new. The other four (Der Riese, Shi No Numa, Verruckt and Nacht Der Untoten) were previously released for Call of Duty: World at War or received when you preordered special editions of Call of Duty: Black Ops. There are no differences between the Black Ops versions of the maps, but they have received a slight upgrade since they were released for World at War. The Rezurrection map pack also comes with a new Moon premium theme and a free download for the Zombies soundtrack.

All 5 maps in the Rezurrection map pack are played with the usual Zombie cast of Dempsey, Nikolai, Takeo and Richtofen, but the locations for the maps are all different. Nacht Der Untoten was the first Zombie map ever released, and it takes place in a small, abandoned, run-down building near a German airfield. Nacht Der Untoten is a very simple map making it good for beginners, but it is still challenging enough for experienced players to enjoy as well.

Verruckt is the second map ever released for Call of Duty: World at War, and it was the first Zombie map that had to be purchased as downloadable content. An old asylum in Berlin, Germany is the setting for Verruckt. Verruckt was the first Zombie map to utilize perks, purchasable power ups which will give players enhanced abilities until they are incapacitated or killed. Verruckt is also one of the creepiest Zombie maps ever.

The third installment to the Zombie storyline is Shi No Numa. Shi No Numa places our four heroes in a swampy jungle located somewhere in the Pacific. Shi No Numa is made up of a central building with four trails leading off to different huts at the end of each path. Shi No Numa introduced players to a new enemy, zombiefied dogs known as Hellhounds. 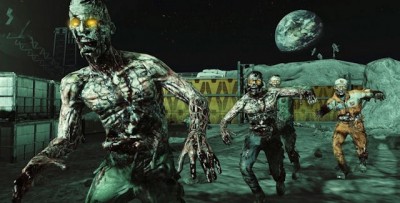 The last of the old maps is Der Riese. Der Riese takes place in a secret Nazi facility located in Germany. Der Riese introduced many new gameplay mechanics to Zombie mode including new weapons, teleporters and easter eggs. The most important thing that Der Riese included, however, was the Pack-a-Punch machine. For the cost of 5,000 points, players can get permanent upgrades for any gun in the game.

Moon is the 10th Zombie map to be released, 9th in the Nazi Zombie storyline and the last scheduled release for Call of Duty: Black Ops Zombies. Moon begins in Area 51 also known as No Man’s Land. All hell is breaking loose here however, and players will soon be forced to use a teleporter located in a nearby hangar to transport themselves to a base on the moon. That’s right, Zombies in space! There is an elaborate easter egg to complete on Moon that will give you a huge chunk of story and some nice unlockables as well, but I won’t ruin those for you here.

In addition to the new easter egg, There are two new weapons in Moon: the Wave Gun and the Quantum Entanglement Device. The Wave Gun is an akimbo weapon that acts similar to a Wunderwaffle only in a smaller radius. Think Ray Gun, but zombies are electrocuted rather than blown up. The Wave Gun also has an attachment that basically turns it into a Wunderwaffle, only it makes Zombies melt instead of die from electrocution. Basically, the Wave Gun is bad-ass. The Quantum Entanglement Device is a secondary grenade that can be thrown to give off a random ability. Some of the abilities are good, while some will hinder your chances at survival. The Quantum Entanglement Device is a really interesting weapon, but it should always be handled with caution. There is also a new perk known as Mule Kick which allows players to carry a third gun.