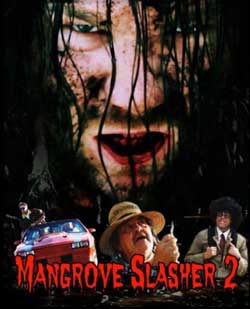 High school students (who are all in their twenties) head out to the beach for some fun and sun, but instead get a bloody and brutal death at the hands of the Mangrove Slasher.

If you have read any of my reviews then you will most likely know that I hate horror-comedies. The biggest majority of them are obnoxious, stupid, and just not funny in general. I have suffered through many of these types of films, so when I got my copy of “Mangrove Slasher 2” and was told that it was a horror comedy film I rolled my eyes and dreaded the thought of having to watch it. I reluctantly popped it in my DVD player and expected to be totally and completely miserable for the next 45 minutes or so. A strange thing happened though, and to my surprise “Mangrove Slasher 2” was actually a pretty damn funny movie and I had a great time watching it! For those of you out there wondering why you haven’t heard of the first “Mangrove Slasher” movie there is a simple reason. It doesn’t exist.

There is no “Mangrove Slasher” movie out there as the filmmakers just called this film “Mangrove Slasher 2,” which I thought was a pretty funny and brilliant idea (which reminded me of the pretty much unknown flick “Unmasked Part 25” that hit video stores back in 1989). The talented minds behind this film have a great sense of humor and know how to make a horror/comedy that is actually funny instead of overly silly and stupid. This movie has the same kind of vibe that Troma, Speedfreak Productions, and Twisted Spine films have, and if you aren’t familiar with any of these companies trust me when I say that this is the highest compliment that I can give to the filmmakers behind “Mangrove Slasher 2.” 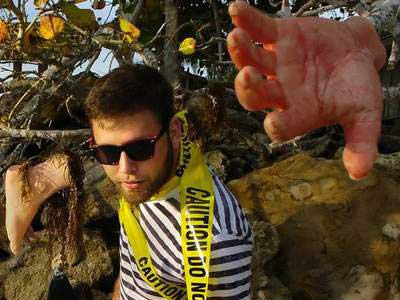 There are many things to like about this movie. Besides being a genuinely funny movie (I loved the “Dude, do the seagull!” bit and laughed my ass off during this part because it is just so weird and out there) we also get boobs, boobs, and more boobs as well as some pretty decent death scenes. This movie has some pretty crazy and over the top death scenes (the woman having her boob cut off comes immediately to mind) that actually look pretty good considering the limited budget that the filmmakers probably had. The scene where the slasher walks up out of nowhere and just starts killing everyone around him is awesome and unless I am mistaken it is a nod to the infamous “boat scene” from “The Burning.”

I think that the main reason I really liked this movie so much is because of the fact that the guys behind it just get it, so to speak. They know how to be funny without being silly and obnoxious like most filmmakers who make these kinds of movies do. To be honest, I think that this movie is a hell of a lot funnier than any mainstream comedy garbage that Hollywood has forced on the masses over the last ten years or so. Given the choice I would watch “Mangrove Slasher 2” over any so-called comedies featuring Will Farrell, Ben Stiller, Jim Carrey, or Robin Williams. It was refreshing to watch a comedy and actually laugh for a change instead of rolling my eyes and groaning the entire time like I did with “The Hangover “(which is possibly the most overrated comedy of all time). 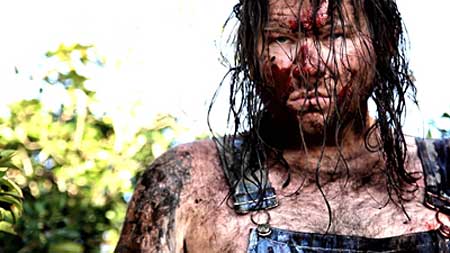 “Mangrove Slasher 2” isn’t for everyone, as I am sure that some people who watch it won’t care for it. I personally thought that it was awesome in every respect and had a blast watching it. It is just an odd, fun little movie and as long as you don’t take it too seriously you will end up digging it. If you are in the mood for something different that doesn’t require you to think too hard then give this movie a shot. It may not become your favorite movie of all time, but it will sure as Hell make you laugh and will keep you entertained, which is something that most movies these days fail to do.