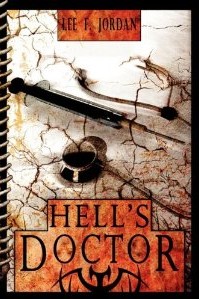 I’ve had a lot of ideas what hell might be like, if there really is one.  I apparently have never put the amount of thought and analysis into the subject as Lee F. Jordan.  It’s safe to say I don’t want to wind up in his hell.  There are plenty of other hells I’ve heard stories about that would be a layup compared to doing any time in this one. I’d take some of that teeth gnashing and brimstone you hear about in the so-called “Good Book,” or any number of Dante’s 8th Circle punishments, as opposed to 99% of what goes on in this particular author’s hell.

There have been plenty of books and stories about one civilization’s hell or another’s since forever and a day ago.  The city of hell that Jordan has created in Hell’s Doctor is one that has it’s own special personality, personnel, hierarchy, rules, inhabitants and infrastructure. You are in for a real treat, albeit sometimes a near-vomit-inducing one, if you decide to pick up the book and check out the neighborhood.

Yes, as the title quite clearly states, hell has a doctor.  You will get to know him and maybe even love him — depending on your feelings on violence and depravity. Also, In addition to the doctor you will meet some famous and not-so-famous characters in Jordan’s version of the land of eternal damnation. There is a quest of sorts that moves the story along allowing you to meet the highest of the high and the lowest of the low (with lower being better as far as your importance and power are concerned in hell).  The quest involves multiple characters and reminded me of the journey through the 9 circles of Dante’s Inferno with a hint of It’s A Mad Mad Mad Mad World, or perhaps it’s more recent update/remake, Rat Race.

At times, the novel feels like one of the a horror survival video games such as Resident Evil, Silent Hill or Alone in the Dark, when some characters face various puzzles and/or challenges.  This aspect of the novel made for a little bit of a different reading experience.   I was way off most of the time, but still had a good time trying to figure out the solutions.  Who knows, maybe Sony will license some of Mr. Jordan’s puzzles and hellish concoctions for Dante’s Inferno II for PS3?

Hell’s Doctor is an inventive take on a subject that has been done many times by many people in the past, and will no doubt continue to be done and redone in the future.  That is because the idea of hell, and everything about it, provides endless possibilities for creativity and storytelling.  Mr. Jordan’s addition to this vast collection of existing hell-works is interesting, unique, gory and even fun and funny on occasion.  It should be welcomed into the legion of previously authored hell-themed literature with open arms and a strong stomach.  By the time your done, there may even be a twist, or a reveal, or two, or three, that you are glad you stuck around for.  If you think you are up for it (I recommend so), Hell’s Doctor will certainly be keeping an eye out for ya’.