When a paranormal research team investigates a haunting dramatized on a classic television series, they encounter a sinister supernatural force thought to be fictional.

I really do hate to knock independent films. The type where a group of friends pool their resources together to make a movie. It’s really difficult to do. I know firsthand, I attempted and failed. Director Kevin DiBacco and his crew were able to make their film “Back to the Beyond” on a rumored budget of around $25,000. I applaud that, I really do. The film was based on an episode of the short–lived ABC series “One Step Beyond” which originally ran on the network from 1959-1961. I have a feeling that this story would have been better told in a different format rather than a feature film, unless it was part of an anthology. Though the film barely runs over an hour, it felt like four. Not a good sign.

The film centers on a group of paranormal investigators known as the P.A.R.A. Force (an obvious nod to SyFy’s TAPS group from their hit show “Ghost Hunters”) that unites to investigate a home on Port Island off the coast of Maine. They realize that the story behind the haunting is very similar to that of a story used on the show “One Step Beyond”. The P.A.R.A. Force grab their bags (as well as their emotional baggage) and head there to figure out what is happening.

I knew it was only a matter of time before horror films would begin using the paranormal investigator as a selling point. It is a good idea, you can attract viewers of the show, as well as horror movie fans. I was disappointed by the fact that the team is never shown investigating anything. When they get to the house they find a tape, watch it, and go to bed. I was hoping that since the film was being marketed to that audience, then maybe it would have focused more on that aspect. “Back to the Beyond” felt much more like a character drama than a horror film. I appreciate the fact that so much time is used on developing some of the characters, just thought that there should have been more time spent on building suspense, which there really was none of.

The acting in the film was mediocre. Not bad, just some of it felt a bit awkward. Usually there is a certain rhythm to dialogue that sounds natural to us, in “Back to the Beyond” there are lines spoken that come off incredibly bizarre. Maybe it was the writers way of giving a unique way for each character to speak, though it really does not work. It may even be a case of the actor not quite getting the line or the director not doing his job either. 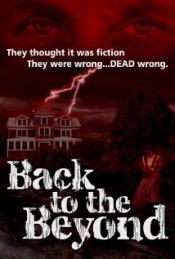 During the opening credits, there is a nice piece of haunting music that begins to set a proper tone. Except later in the film, there are some really odd choices of music and the placement really made me wonder what exactly they were thinking. Like some R & B type song playing while lead actress Jennifer Gjulameti stares out over the water, or the kickass metal song that starts playing during the climax where our Force runs and hides. They felt really out of place to me. There was some really nice acoustic instrumentals that did work really well and would have appreciated it more had it been used throughout.

“Back to the Beyond” was a noble effort that mostly just falls flat for me. I liked that there was a serious attempt at building character, something most recent horror films forget to do. Maybe if they would have done away with the needless flashbacks where nothing happens and tried harder to build suspense then maybe this wouldn’t end up being just another low budget film that in the morning I will have forgotten. This wasn’t the one so keep trying guys. The DiBacco brothers are smart businessmen, I have a feeling they will bounce back and keep moving forward which is the best thing they can do.