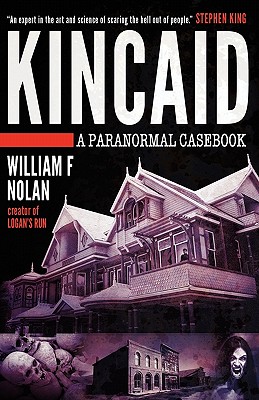 Synopsis
A collection of three stories chronicling the adventures of David Kindcaid, a paranormal investigator who is very similar to Carl Kolchak from the old television series “Kolchak: The Night Stalker.” The book follows Kincaid as he investigates cases that have supernatural and horror related elements, and he finds himself up against some truly odd things during his adventures. The first story sees him looking into a series of bizarre and brutal murders, in the second story we get to join Kincaid as he hunts for a missing actress and the final tale finds our hero searching for another missing person and dealing with a haunted house.

Review-I personally prefer short stories to novels that are way too long and drawn-out (I am looking at you, Stephen King), and if I can find a collection of short stories that is even better. I love reading short story collections as it allows you to pick from a variety of stories to choose from depending on your personal taste. I also like them because if one story sucks, at least you have other ones that you can read that may be more enjoyable for you. With that being said, I had some difficulty really getting into Kindcaid-A Paranormal Casebook. It was well-written (for the most part), but it just seemed to be missing something that kept me from fully enjoying it like I initially thought that I would. The collection was written by William F Nolan, who created the totally awesome and ahead of its time novel Logan’s Run, and I felt quite honored to be able to review his work, but in the end I couldn’t help but feel more than a little underwhelmed.

One of the reasons that I had a hard time getting into Kincaid was that none of the stories really held my interest. The first story started out on a somewhat interesting note and just when I was starting to get into it the whole thing just falls apart at around the halfway point. It was almost as if Nolan sat down to write it while he was in a very energetic and creative mood but as he went on he got bored with it and just wanted to end it as soon as possible as it just sort of peters out. The same can be said about the second story as it starts off showing promise but as I continued reading it I found myself losing interest in it and was tempted to skip ahead to the end. The third story though, didn’t hold my interest at all from the beginning and at times it was very hard for me to get all the way through it before I just gave up on it. Some readers may enjoy these stories but I just couldn’t help but feel more than a little bored with all of them.

I also thought that the entire collection was very unoriginal. There wasn’t anything here that I haven’t already seen before, and none of the stories really bring anything new to the table. The first story has been done several times in some form or fashion by other authors, as have the second and third stories as well. The characters aren’t original either as most of them come off as either copies of other, better-known characters from other works of fiction or film or are just bad stereotypes. For instance, Kincaid himself is pretty much Kolchak, his cop friend is your typical grouchy, hard-boiled police character who refused to believe in the supernatural, and the “bad guys” are pretty cookie-cutter. I also had a hard time buying that Kelly (who is a totally unlikable bitch when we first meet her) becomes almost a different person in a rather short period of time and is actually a love interest for Kincaid.

Kincaid-A Paranormal Casebook is by not any stretch of the imagination a terrible book, but it just wasn’t for me. Some people, especially those who are into “The X-files” and the like are sure to enjoy it. Nolan is no doubt a talented writer and I enjoy most of his work, but I really have a feeling that he didn’t quite put as much effort into these stories as he has with his other works. Check it out if it sounds interesting to you, you may find yourself loving each and every story.