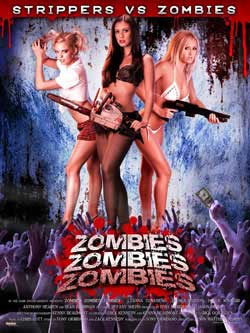 A drug experiment gone wrong produces a league of blood-thirsty zombies. It is up to a small band of exotic dancers trapped in a gentleman’s club to fight back. Together they must rely on their wits and skills to survive the night, and pray that they don’t become victims of the flesh-eating zombies!

Zombies Zombies Zombies is a very run of the mill low-budget picture on the tail of another low-budget film with a similar setting, Zombie Strippers. I have not seen Zombie Strippers so I will not be making any comparisons. Zombies, Zombies Zombies come across mainly as a chance for director, Jason Murphy, and screenwriter Anthony Steven Giordano to use the fact they had access to Playboy models and a stripper pole. The girls in this movie are gorgeous, but their acting chops leave something to be desired even for an ultra low-budget. Before the zombie outbreak occurs the acting of these models is pretty brutal. Admittedly the dialogue between from some of the strippers is pretty good, even though acted terribly, but then enters Johnny Backhand Vegas, the stereotypical pimp and the derivative but enjoyable dialogue goes out the window.

After a small teaser, with stripper Harley’s daughter at home watching a zombie movie, the plot of the film starts in a lab where a Dr. Stewart is developing a new cancer cure. After a few minutes of playing around a test tube and injections into a rat, Lucas walks in trying to find some of the drugs Dr. Stewart gave to help curb his crack addiction. Joe mixes the proposed crack addiction cure with the cancer cure and it leads to, you guessed it, a formula to create zombies. Joe the addict shares his zombie crack with one of the hookers who hang out in front of the strip club and the infections start. The hookers, strippers, and Johnny Backhand Vegas all get into a confrontation outside the diner when the hooker who tried the experimental crack turns into a zombie who then infects several others.

The uninfected strippers, hookers, and boyfriends run back to the strip club and barricade themselves inside. As night wares on more of the hooker’s customers show up and are quickly turned into zombies and soon a small mob of zombies is created. Eventually, the deduction is made the crack is what caused the transformation and a search for Dr. Stewart ensues with a very uneventful run to the van. If it was that easy for two people to get to the van why didn’t everybody try instead of blockading themselves inside? This movie does not present a very accurate way of how people would react in a zombie infestation, even by b-movie standards.

The group had several working cell phones and I presume a working land line as well, if you want an effective zombie movie you can’t have phone access. An easy solution to this problem would be to have this movie set in the nineties. They only called the police once, when that one police officer was eaten no other rescue workers appeared. What this movie needs is homage to Return of the Living Dead, where the zombies famously requested “send more paramedics.” The movie’s plot obviously doesn’t stray from the classic barricaded inside, while zombies are outside.

Unlike Return of the Living Dead, Zombies Zombies Zombies fails on a comedic level. All of the jokes are the actors simultaneously using sad exclamation points or sarcastically pointing out the obvious. Despite the funny setting and title there are no real successful attempts at comedy. The character of Johnny Vegas was despicable enough used not only as the obvious villain who gets his (because of his abuse of his hookers), but also as a comedic character, screaming “them bitches is zombies” and attempts to use him comedically were the worst of them all.

One of my problems with the infected zombies in all newer zombie films is the fact that far less work needs to be done with make-up. In order to mark the transformation of the first zombie that appeared in Zombies Zombies Zombies was simply the addition of colored contact lenses and some fake blood around the mouth. As the movie progressed and more zombie killing sequences were called for, the gore got quite a bit better, even bringing out a chainsaw and slicing off a zombies face.

Getting through this movie was not a chore. The girls were nice to look at and I even enjoyed the last ten minutes with a pretty unique heroic sacrifice, but I have to say most of my entertainment came from title.
(If you still don’t get it Zombies Zombies Zombies: Girls Girls Girls)