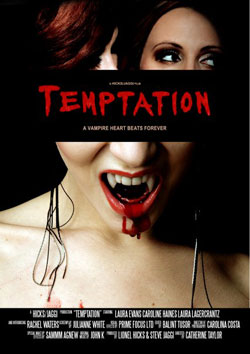 After a drunken night out on the town Isabel accepts a ride home with a strange man. Bad choice on her part considering that he is a rapist, but she finds that out soon enough when he rapes her in a dark alley. Thankfully she is saved when the mysterious Aurelie shows up and proceeds to rip his throat out. Unfortunately though, Isabel gets more than she bargains for when she asks Aurelie to help her. You see, Aurelie is a vampire and she turns Isabel into a creature of the night as well. Will Isabel be able be able to resist her need for blood or is she destined to feed on all of those near and dear to her?

Like zombies, there are tons of vampire movies out there. I never really got the whole love affair most people have with vampires so other than a handful of movies (such as “The Lost Boys” and the pretty obscure “To Sleep with a Vampire”) I really don’t care for them. “Temptation” is basically just another vampire movie where someone struggles with the fact that he/she has recently become a bloodsucker and there is nothing different or original about it. If you’ve seen any other vampire movie with this premise then you’ve pretty much already seen “Temptation.”

I found the movie to be incredibly slow-moving and as a result I was bored out of my mind while I was watching it. It takes forever for anything to happen and even when it does it isn’t anything to write home about. We spend half the movie watching Isabel try to figure out what the hell is wrong with her while she participates in yawn-inducing activities such as arguing with her boyfriend and hanging out with her mom and sister. If you are looking for an action-packed vampire flick that really holds your attention you may want to skip this movie and find something else (on the other hand if you suffer from insomnia then “Temptation” may help you get a good night’s sleep).

I really had trouble caring for any of the characters and found most of them to be boring, annoying, unlikable, or all of the above. Isabel got on my last nerve with all of her whining and crying and her boyfriend is just a horrible character and I couldn’t wait for him to die. The only characters I came remotely close to liking were Aurelie and Isabel’s sister Kylie, but there were times where they even got on my nerves. Most of the vampires that followed Aurelie around were interchangeable and had no personalities (or names), so there was not a single one of them who stood out.

There was a serious lack of blood and gore considering that it was a vampire flick. We only see blood a few times and other than the usual biting and throat ripping there is no other gore going on here. The violence in pretty tame and all we really get is a man being bitten over and over again by several vampires all over his body (but most of it is off screen), a light stabbing and a couple of people getting impaled. I think I have actually seen more vampire related gore on a couple of episodes of “Angel” and “Buffy the Vampire Slayer” to be honest. I don’t know if they just didn’t have the budget to include tons of blood and guts, but I was hoping for at least one good gory death scene but it just didn’t happen.

“Temptation” just wasn’t for me, but there may be some people out there who like it. I thought that it lacked originality (hell, even the title isn’t original as there are so many movies out there with the same name that it isn’t funny). I think it wanted desperately to be “The Lost Girls” but it just couldn’t quite pull it off. It brought nothing new to the table and did pretty much the same thing that hundreds of vampire movies before it have already done. The way it ends leaves things wide open for a sequel, and though I doubt it will ever actually happen let’s hope if it does that they try something a little more original with it. 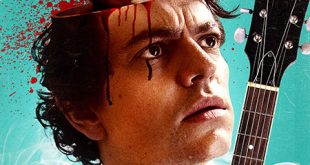 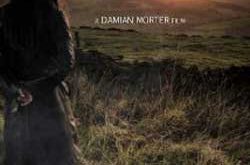