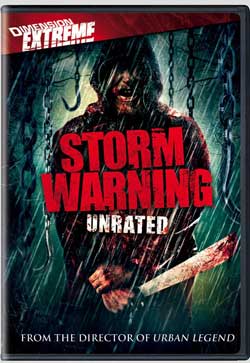 Husband and wife Rob (Robert Taylor) and Pia’s (Nadia Farès) weekend boating idyll quickly turns into a holiday nightmare when the weather turns bad and their craft gets lost in the storm, landing them in a desolated swamp. Seeking refuge in a dilapidated house, the couple’s problems only worsen when the owners — hillbilly rednecks with a barn full of marijuana — return and proceed to enslave and humiliate them.

Storm Warning is a 2007 Australian horror film starring Nadia Farés and Robert Taylor and it’s directed by Urban Legend director Jamie Blanks. It’s about a married couple (Rob, played by Robert Taylor and Pia, played by Nadia Farés) go out sailing. They get lost during the beginning stages of a storm, so they find an island and get off on it. They go and find a house and try to stay there for the night, but the men who own it have other plans for their new guests!

The movie starts out with Rob and Pia driving along while talking about Rob’s Mom. They go out sailing for a day in a little sailboat. (Pia even makes a remark about how small the boat is.) They go fishing and then get lost right before a storm hits. (There are several shots of dark clouds.) They get off on an island and they try to find shelter. As they’re looking for it, a bloody man is being dumped out into a field. They find an empty house, as well as a barn that has tons of pot in it. They stay inside until the home owners come back. (David Lyons, who plays Jimmy and Mathew Wilkinson, who plays Brett.) When Jimmy and Brett come back home, they freak out that Rob and Pia are there. They calm down and let them stay for the night. During this time, they begin to torture them, even more so when their Dad comes home. (John Brumpton, who plays Poppy.)

The movie is OK. The acting is good and we really believed David Lyons and Matthew Wilkinson. They were very creepy and dirty. Besides the good acting the movie took forever to get to the plot. There were too many shots of the dark clouds and after a few minutes, we had gotten the point. It’s like the movie was taking their time with getting to it.

At a running time of 82 minutes Storm Warning feels as though it’s been padded out in its opening act to fulfill a quota. But once the Australian drug family makes it home the movie takes on the proper pacing. And it gets violent. Boy does it get violent. Everette De Roche wrote the script thirty years ago and it was evidently shelved for having too much violent content. How our world has evolved.

We didn’t care for the movie but primarily because we just didn’t care for it. You might. If violent revenge is your thing, by all means check this one out. Objectively our only two complaints are the aforementioned overuse of shots of the clouds (We read the movie title, we know the storm is coming) and the fact that the two leads are really not that sympathetic. Yeah, the situation that they’re in is realistically terrifying but as characters they just aren’t particularly interesting.

A friend of ours who is destined to be a professional writer suggests that in order to make an audience care about characters they either have to be funny or something horrible has to happen to them. It’s kind of an embarrassing confession but by the end of the movie the bad guys have become the more compassionate ones. De Roche’s script is arguably a sexual fantasy of submission. As Rob proves to be useless over and over Pia transforms into a one woman slaughterhouse, metaphorically (and, you’ve been warned, literally) emasculating her captors. It’s not to say it’s inherently offensive, but let’s be honest about what kind of story we’re watching. It’s violent exploitation.

The cast is actually better than you’re expecting them to be. The drug family plays their motivations quite convincingly and they each add a few layers of depth to their characters that could easily have been neglected. Most actors agree that villains are more fun to play than heroes. The challenge of an actor is to humanize their villains. Storm Warning isn’t afraid to get inside the heads of its brutal killers and show them as real people.

The bottom line is the movie does what it sets out to do. The content is cringe worthy and often unnerving, but it never drops the ball it has chosen to carry. If it sounds like your thing, have at it. We, however, are going to put in a light comedy to decompress.