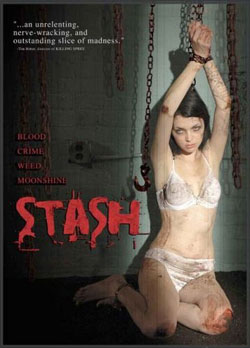 In the backwoods of Kentucky, Bud (Kevin Taylor) operates a marijuana-growing operation from his house. When he catches a pair of crooks trying to make off with his valuable stash, Bud forces them into a dangerous game they may not survive. Debbie Rochon, Billy W. Blackwell and Chris Begley co-star in this highly disturbing horror movie about drugs, kidnapping and brutal torture. Jacob Ennis directs.

A sadistic hillbilly drug dealer tortures and kills young women. Independent film makers love zombies, vampire and torturing young women, not always in that order. I never have understood the appear of torture and humiliation movies, so I guess this DVD landed on the wrong desk.

So I will direct my attention on what I can comfortably review with no reservations. Karen Boles is the star of the movie and victim number three of the hillbilly and does a nice job of acting when she is trying to come up with reasons not to take a ride with the two kind men. Sadly she is not given much to do after she is captured and chained to the wall in her bra and panties. She does try acting her heart out for the rape scene but as she is still wearing panties and the hillybilly still has his clothes on it is more funny than anything else. As we saw two other victims totally naked I can only imagine that Karen had it in her contact that she was not to appear nude and I don’t think that would have helped anyway.

Kevin Taylor as Bud (the drug dealer, Bud, get it?) has his fans but I found him to be way over the top and kinda funny in a my uncle is drunk and he can’t be quiet way. I just don’t find him scary and the rape with his pants on just doesn’t cut it.

Debbie Rochon has a small part as the worried lonely mother of victim number two and I think she brings a lot to the table. Her character is more complex than it was probably written. In her first scene she seems tipsy, afraid, lonely and just not wanting to be left alone without her daughter. A good actor can bring so much to a film if they are allowed to.

Stacey T. Gillespie as Stan, the kidnapper with a conscience isn’t bad either as he tries to work out if he can live with the fact he knows Bud is killing the women he and CJ are supplying. He comes complete with a trashy mother who yells at him to do something. Stacey shows the confusion bubbling up in him.

Nathan Day as CJ our other kidnapper is just okay, he really doesn’t do anything in the part.

Chris Beglety and Deborah Tucker seems to be adlibbing their lines as the parents and don’t come across as strong as the other actors. The Detectives really seemed weak in their roles and not very commanding when it was needed.

What I liked about the movie:
Debbie Rochon was very strong in a small role.

The sound was good and clear.

The camera work wasn’t bad for an indie.

Karen Boles for trying to make something out of her character.

What I didn’t like about the movie:
Bud just didn’t do it for me as a bad guy

The parents just not being strong in their roles

So what we have here is a low budgeted movie with some good performances, some nudity, some fully clothed rape and a bad ending. I give it two and half stars. The film is watchable but they could have done a lot better and hopefully we will see a lot better in the future. I am having some friends over for some beer and pizza and we will watch this again making silly comments long into the night. 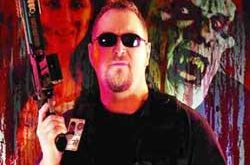