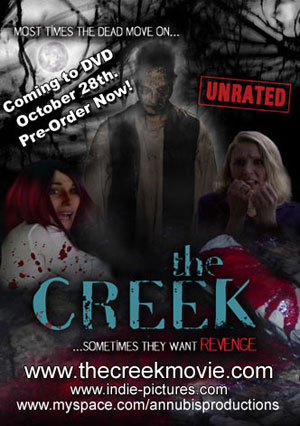 After the loss of their close friend Billy, six friends go their separate ways only to be brought back together five years later by his ghost. In order to set things right, they decide to go to the cabin where he died to put his spirit to rest. Old rivalries and long festering grudges quickly rise to the surface until one of them mysteriously dies and they all realize they’re trapped together in the woods. Without any means of escape and no clue as to who or what is after them, they all must try to stick together in order to escape The Creek.

This movie will make you think twice about going camping with friends. It’s raw filmmaking, right down to the bloody bone! The characters stand out as normal everyday people, just like friends you might know. That’s the appeal here… and through some good dialog you get to know each friend: Billy ( Tim Jesiolowski ) the dead friend – he held the group together, Emily ( Melissa Rhoads ) the annoying friend – maybe a little over the top), Angel (Kathryn Merry) the girl all the guys wanted – she pulled out the best performance of the film, Elise (Nancy Soulliard) the bitch – the best death scene in the movie, Coop ( Brian Jesiolowski ) the cool friend – you would want to drink a beer with this dude, Jesse (Erik Soulliard) the guy you know – everyone knows a guy like this, Calvin (Dave Foster) – the d*ckhead , you would want to punch him in the skull too !!!! When the friends start dropping dead, they’re all up THE CREEK without a paddle. 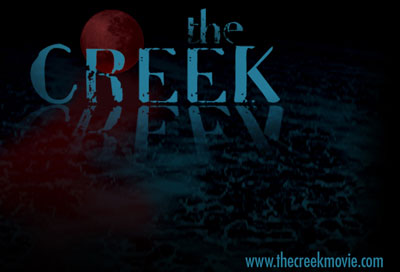 It’s an ultra low budget horror film that actually works, and that’s a rear find. The Creek and the surrounding woods offered a eerie setting as the film’s backdrop. I was particularly impressed with how well edited this flick turned out. It was a hauntingly professional job with smooth transitions.

If you want to support low budget independent horror, drag this movie out of The Creek, wipe off the maggots and rotting flesh and ENJOY!

Two weeks after principal photography wrapped, the entire cabin location was flooded by the nearby creek. The water flowed over the roof of the cabin and the trail to the set was blocked by downed trees and debris. Re-shoots in this location were a challenge. 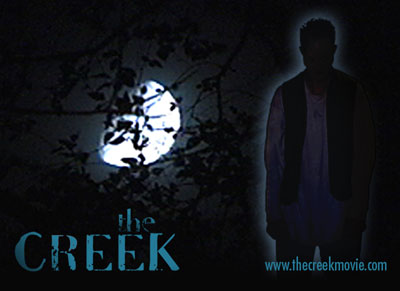 It rained three to four days virtually every week of shooting but only one day had to be rescheduled for it.

The actor who plays Coop is 6 foot 7 inches tall. His obvious height
advantage over the other players was blended into the scenes by placing him in holes, ditches and gullies.

Gaffer/key grip, Chris Evans, will forever be known as Sasquatch. He earned his nickname after spending long hours lighting distant trees in the woods and then scaring everyone by suddenly reappearing on set.

Body doubles for Angel and Emily were used in one scene of reshoots. The doubles scene blended seamlessly with the existing footage and even the main actresses themselves thought they shot that scene.