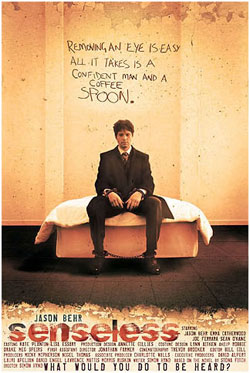 Elliot Gast doesn’t realize it just yet but he is about to be an international celebrity. Elliot is going to have more than paparazzi problems though; it’s kind of hard to when you are simply trapped in such a small living space. Elliot doesn’t realize how bad things are going to get when he first sees the cameras mounted all over the small space, he doesn’t even have a clue when he starts meeting his masked captures; that however is when things start to get interesting.

“Punishing me for my work is like beating a paper boy for bringing bad news.”

Genre cinema always paints some sort of picture of what society is; Simon Hynde’s 2008 film Senseless is a great example of this. We live in an era of internet celebrity; an unknown person can instantly become famous just by posting a few videos onto YouTube. We also live in an era where Americans are looked down upon for being an imperialist nation. Hynde has captured this era perfecting in his film and at times it can get pretty ugly. 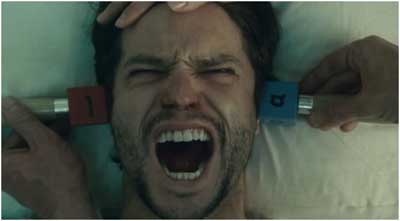 Elliot Gast is a successful American businessman. He is currently working over in Europe and while we are getting introduced to the young man we learn that he attended Princeton and did classified work for the United States government. As a viewer we really don’t learn Elliot Gast’s current job until much later in the film, and then things start to make sense. Elliot is leaving the pub where he just currently had a meeting and talking on the telephone to his wife when he is suddenly attacked from behind. When Elliot wakes up he finds himself hostage inside of a small living space. Don’t get me wrong the living space makes some of the apartments I have had in my day look down right huge. The walls and floors of the space are all painted a sterile white, except for the floor in the bedroom which is a dark blue. Yes I did say bedroom, there is also a bathroom and a living room, like I said I’ve definitely had smaller apartments.

The first few days inside the space are rather uneventful Elliot makes some attempts to escape by beating the windows and doors with chairs, but we wouldn’t have much of a movie if he got out now would we. By the third day Elliot makes his way over to a camera, he realizes he is a hostage so he makes a few demands of his own. He wants some new clothing to wear, some books and a particular brand of cigarettes. After a nap he realizes that someone has just been inside of the space, and they left him everything he asked for.

Simon Hynde’s Senseless sets you up that way, Elliot has no idea what is about to happen to him the next day and the weeks that follow. You see the next day Elliot meets another masked capture this time it’s a woman. She tells Elliot that she is to be his liaison between himself and the rest of the group. She tells him that the group has watched him for some time and that they know everything about him. When Elliot calls the group extremist and the woman informs her hostage that extremist have bombs, they have him.

Not even a week into his stay Elliot discovers that his captures have more in mind than just filming their hostage living in the small space. The group has decided to torture their hostage by removing each of his senses one at a time, of course broadcasting it onto the internet. As the tortures get worse the audience starts to grow and soon the group is influenced by the madness of celebrity. Some of the tortures that Elliot is submitted to are: having a hot iron placed upon his exposed tongue, his nostrils are burnt closed with sodering irons; his hands are frozen in ice water and then viciously grated by a cheese grater. These tortures are horrible on screen because they are done with items one can find in almost any house, and the fx for the film really sell the tortures. After having his tongue burnt by the iron we are given several glimpses, at day eleven the now dead tissue is actually peeled away by Elliot himself in a stomach churning moment. 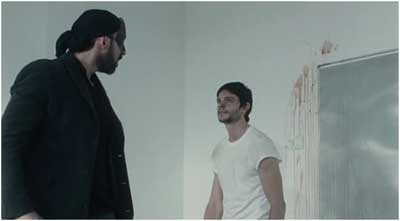 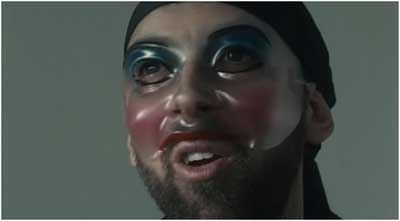 The tortures aren’t just physical however, after having his tongue burnt Elliot finds it hard to eat so he starts to drastically lose weight. When the group decides to take away their hostages hearing they play a tape of Elliot’s wife begging for her husband’s safety right before they shove leather tools into his ear canals.

One would start to feel sorry for Elliot I suppose but Hynde offers you glimpses into Elliot’s past via flashbacks and the viewer starts to learn just what kind of man Elliot is. During these flashbacks you learn that Elliot finds money and his career more important than his marriage to his wife. There is also a flashback of Elliot enjoying a rare dinner that would upset members of PETA very quickly. The flashback that gets the most time spent on it however is Elliot as a child literally stealing from another blind child. It sounds like Elliot is the perfect candidate to be a stereotypical American, and that is why he is chosen.

The fx in Senseless not only sell the tortures that are seen on the screen. Hynde takes advantage of each torture and uses it in his direction for instance after Elliot is deafened the film takes a more hushed tone, even the other characters now speak in a much muffled fashion. The film really only takes place in the one location, but it never really gets boring. Just when a viewer thinks that the film is starting to get slow the masked captors come in again and torture their hostage some more all leading up to the climax that will leave many viewers jaws on the floor.

Simon Hynde’s Senseless goes well beyond the torture p*rn genre and brings the viewer to light about the true horrors that happen all over the world every day. We are talking about an era when terrorist groups send videos of POW’s executions to the media and Hynde hits the nail right on the head.