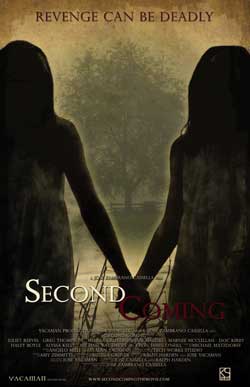 As children Lora always felt like she had to take care of her twin sister Ashley. At all costs she made sure that her sister was alright. Now something is wrong, images of Ashley as a ghost keep appearing to Lora asking her for help.

“Revenge can be deadly!”

Second Coming is an interesting low budget shocker. The film is on a budget, but it looks beautiful. The sets and use of color and lights is amazing, it makes me wish every low budget film maker thought like this. The atmosphere of the film is also quite thick at times.
Second Coming deals with mainly two characters. The first of these characters is a woman named Lora. Lora has been having trouble sleeping; she keeps seeing images of her sister Ashley in her dreams. Ashley doesn’t look friendly or at all inviting however, she keeps asking for help. Lora frantically tries to call her sister to but no avail, her phone just keeps going straight to voice mail.

Soon Ashley isn’t just content to haunt Lora’s dreams. We start to see her make brief frightening appearances as a ghost. These sightings happen everywhere from a crowded city sidewalk to Lora’s own photo lab.

Our second character is a man named Barry Kane. Barry suffers from Tinnitus, which we learn before the credits even start is the name for when you get those weird ringing sounds in your ears. Barry has Tinnitus really bad though, so bad that he is often forced to wear foam earplugs to block out the noise. Barry lives with his wife, who is heavily involved in volunteering with the church and upholding a nice family image. Lately though Barry is acting really strange. He is super irritable and when he and his wife are starting to get intimate he becomes very forceful. His wife knows something is wrong; she just can’t put her finger on it.

Eventually, thanks to Ashley ghost helping Lora along the way, Lora learns the truth. After finding Ashley’s waterlogged dead body she also finds one of those weird foam ear plugs that Barry wears. All of the pieces start to come together and Lora decides that it is time to get her revenge.

Second Coming isn’t a bad movie, but there are parts that I found very slow. I almost would not really put this film in the horror genre. It is more of a drama with a few random ghost scenes thrown in. The ghost scenes really aren’t that disturbing, but the make up is nice if you aren’t tired of seeing long hair waterlogged ghost girls yet.

The film also recycles a lot of its scenes, as if it is padding itself. There are quite a few flashbacks of Lora and Ashley as little girls living with their alcoholic and abusive father (who honestly didn’t see that one coming a mile away?). We are treated to these flashbacks through most of the film and they show everything from the father throwing hot soup onto Ashley to an implied sexual abuse scene, obviously the two girls had a hard time growing up. The flashbacks however are one of the more interesting parts of the movie. It is during one of the flashbacks that we learn just how far Lora will go to protect Ashley, and what exactly she is capable of. The scene plays out rather quickly with the last shot leaving a very disturbing image in your head.

Second Coming is a smart low budget horror film (I hate to repeat myself but the film really is great looking). Fans of revenge stories I think will appreciate the film more than someone who wants to watch another ghost story. Seriously, there really isn’t that much of the “ghost” to consider it a ghost story. 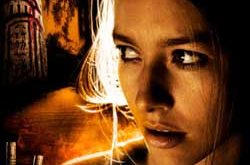