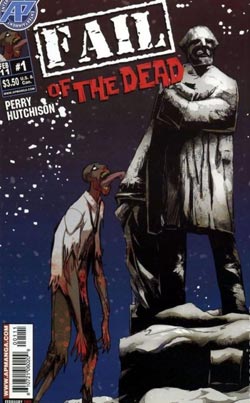 “Ian and his team find themselves under attack from a roving army of marauders. Now they must fight to the death to protect not only their mission, but a small group of civilians who, against all odds, have survived the zombie apocalypse. But even if they defeat the attackers, will the victory come too late, given Ian’s fateful prognosis?”

Artwork: 4.5 out of 5
The art in this book delivers on 2 levels. Level 1 draw some kick ass zombies. What’s that you say, Hutchinson and Perry delivered? Nice! The zombies range from comical to menacing as the shots play out and it all just looks so GORE-Geous. Level 2 is visual humor. This book is so funny in the visuals alone, that there are no need for words, and guess what there aren’t very many.  I can’t sit here and not stopping laughing as I look at this book. So well done.

Story: 4.5 out of 5
This is the best part. Like I mentioned with the artwork there just aren’t many words. Matter of fact other than the word FAIL I think only a few more show up. Yet the use of Fail is so well done that it’s a huge winner! I can’t say anymore.

Dying Breath: 4.5 out of 5
This book had me laughing from start to finish. The few shorts that run more than one page are hilarious and the one page shorts made me laugh my… um… body off! Haha. I have said it before and I will say it again, Antarctic Press has a crew of great horror creators that you need to be taking a look at. Not all of it is the funny stuff either, but it is a great un-failing attempt.
If you would like to buy or know more about Fail of the Living Dead #1 you can find it at www.antarctic-press.com

Tags Fail of the Living Dead