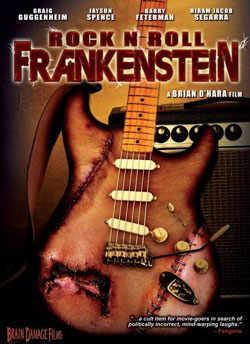 Bernie Stein is a sleazy music agent who decides to (literally) create the next big rock star. With the help of his scientist nephew and a drug addict roadie the trio steal the body parts of deceased rock legends and combine them together to make a creature that they think will be the greatest musician of all time. Due to Iggy the roadie’s incompetence a crucial body part (Jim Morrison’s penis) is accidentally destroyed so he grabs another dead person’s dong instead, thinking that one is just as good as another. Unfortunately the one that he ends up with belongs to Liberace, and chaos and wackiness ensues when it is attached to King, the patchwork creature that they have created. How would a person with Elvis Presley’s heterosexual brain function with Liberace’s homosexual sex organ? Not very well, apparently.

“Rock ‘n’ Roll Frankenstein” is one of those feel-good movies in the vein of “Forest Gump” or “The Blind Side” as it is very inspiring and gives us insight into the human condition. No, I’m just kidding. It’s actually just a parody of “Frankenstein” where Frankenstein’s monster gets the wrong penis and then goes on all sorts of wild and crazy misadventures. I know that it will never be nominated for an Oscar of any kind and there are times where things are just a little too silly, but I’ll have to admit I actually liked this movie.

While I wouldn’t go as far as to say that it is one of the best movies I have ever seen I will say that it served its purpose and was an entertaining way to spend an hour and a half. I didn’t quite fall in the floor laughing at it but there were a couple of times it got a chuckle out of me, and all in all I thought it was a pretty neat take on the whole Frankenstein thing.

I grew up watching Troma movies and to this day I am a big supporter of Lloyd Kaufman and his crew (“The Toxic Avenger” and “Class of Nuke ‘Em High” are two of my favorites). “Rock ‘n’ Roll Frankenstein” had a definite Troma feel to it as it was wacky, over the top, and contained some fun low-budget gore as well as some pretty bad acting. I think it is pretty obvious that the filmmakers were highly influenced by the folks at Troma and I wonder what Kaufman and his band of merry men thought about this film if they saw it. Hopefully they were impressed by it and in the future we will have a crossover movie featuring Toxie battling it out with King or one that features them teaming up to take down some evil force.

I think that the plot of the movie was actually pretty clever and is something that hasn’t quite been done before. The idea of collecting body parts of famous musicians (such as Jimmy Hendrix’s hands, Elvis Presley’s brain, Keith Moon’s legs, etc) and putting them all together to make the most talented rock start ever is borderline genius in my opinion. I thought that the premise was original and that it worked. I’m not sure how director Brian O’Hara and the other writers came up with the idea for this movie, but my hat’s off to them for doing so.

I really liked the characters in the movie and they helped make it more enjoyable. While none of the actors in the film are what I would call talented thespians it was obvious that they worked hard on the film and had fun while doing it. Jayson Spence is pretty funny in the role of Frankie Stein, the mad scientist who enjoys having sex with corpses. Graig Guggenheim does well in the role of King, the monster that has a lot of conflicting thoughts going through his mind since he is made up of so many different personalities.

The best characters in my opinion are Iggy (get it? It’s supposed to be like Igor), the stoned out of his mind roadie who will try anything to get a buzz and Bernie, the foul-mouthed music agent who rarely has a line where he doesn’t use at least a handful of curse words. I think that Bernie and Iggy have the best lines in the movie and in my opinion I think it is them, not King the monster that makes the film.

“Rock ‘n’ Roll Frankenstein” is definitely not for everyone. I am sure that there are a lot of people out there who will just not care for it. It is a strange one that features such things as a man arguing with his penis (who speaks to him using Liberace’s voice) about having sex with other men, a scene where a gay priest is stabbed in the ass with a cross (with a statute of Jesus attached to it, no less), and a grand finale involving King battling it out with his own giant green d*ck that has taken on a mind and a life of its own.

Yes, this is a very strange film indeed and while there are times that I think they went a little overboard with some gags (the thing with the gerbils and the condoms was not funny at all and I really didn’t see why they felt the need to keep going back to it) if you are into Troma movies I think you will enjoy this one. Give it a chance if you are in the mood for something a little different and out there. As far as horror-comedies go it isn’t that bad, and you could do a lot worse (like watching any of the horrible “Scary Movie” films).