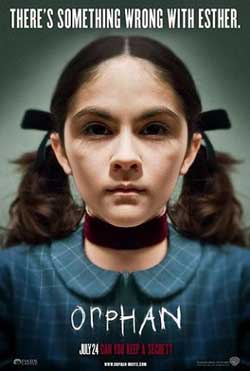 A husband and wife who recently lost their baby adopt a 9-year-old girl who is not nearly as innocent as she claims to be.

First let me say Orphan is a well done film. Though I still wondered why and how it made it to the theater circuit as a feature film. We are not really being introduced to anything new and much can be being easily described as derivative of former films we’ve seen before. Where do we begin? Films like “Omen”, “the Children”, “the Crush”, “The Good Son”, and quite few more that allude me at present are the model for “Orphan”. Better yet, I like to refer to these films as “bad kid goes wild”.

The film begins as a young couple loses a recent pregnancy to child death. With 2 children already, this 3rd child was highly anticipated to complete this well placed family unit. Obviously well to do with big house in the country, these folks have it going pretty well for themselves. Thru conversations and subtle reveals we find that the incident took its toll upon the parents, with the wife recovering from a brief stint with alcoholism and the husband unfaithful to leave a scar on theirmarriage.

The need for an addition to the family is almost a healing band-aid from where they were. Adoption seems to be the perfect solution. So Kate and John Coleman (Vera Farmiga) (Peter Sarsgaard) take to the local agencies to find a suitable daughter to add. In comes Esther ( Isabelle Fuhrman), a remarkably gifted and well spoken child. She easily woo’s the family into adopting her and begins her new life away from the orphanage.

Esther though is a bit indifferent. Wearing classic victorian outfits, a talent for fast learning and a pretty nasty mean streak all contribute to t her reclusive individuality. Though when children and adults don’t mix with her views on life, she can become quite vengeful and violent. The formula is pretty evident here. We know that things will escalate, things will get more violent and things will go wrong. Past history reports begin to paint a different picture than what she presents herself as and this is when essentially the honeymoon is over.

It appears as things progress, that Esther is a bit more calculating than one should be for a young child, which is the key. Of course the parents at first begin to sense things, until evidence all begins to point towards Esther and her capacity for being at the wrong place at the wrong times.

The children, Max (Aryana Engineer)and Daniel (Jimmy Bennett) fear for their lives as Esther threatens them on a daily basis and meanwhile works on doing all she can to separate the family with careful manipulation. To not ruin the surprise…… this film “does” have one. I think that surprise is what elevates the psychological presentation of this over other bad girl films. With a cast that all works wonderfully together, director Jaume Collet-Serra has created a film that is really more perfect for the young adult crowd looking for a thriller.

It does sort of bring you back to the days of Damien and the “Omen” even though the film has nothing to do with the supernatural. As Esther continues to terrorize the family a back story begins to unfold as well. We knew that there would be one, so no harm there but with it……. the audience gets a better picture of what they are dealing with. Isabelle Fuhrman is perfect in her role as Esther which steals the show with her calm but subtle deviance.

If you’re like me, you probably would be saying by now, “I think that kid needs a good beating”. Even though I was a little reluctant at first as to whether I would enjoy this, it does provide the perfect formula of an on the edge drama / thriller. Take a trip to the theatres?….I’d say only if you need to, if not then save it for a decent rental and check it out then.

For horror fans it might be a nice change of viewing if you are exhausted with seeing folks tortured to death with clever devices or tired of films that send kids off to foreign countries.