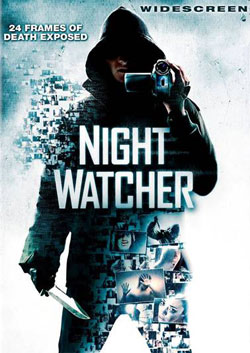 Who says that you can’t meet the right person at a suicide support group? Meet Angie and Brian they are on their first date and in between learning about each others favorite type of food they talk about their parent’s suicides. If that dinner discussion wasn’t enough listen in as they both talk about how both of them have received vhs videotapes, videos that show their now dead parents in their day to day lives. Something doesn’t sound quite right; they had better get behind everything before their next date though that’s for sure.

“More people kill themselves than each other.”

Will Gordh delivers a clever thriller in 2008’s Night Watcher. The film begins as if one is looking through a viewfinder at two couples who are enjoying themselves. Three of the four members get up to leave the area and while they are gone the girl who was left alone suddenly sees something off in the distance. As she moves forward to explore she suddenly realizes that it is a camcorder on a tripod set up to record the group’s activities. Before the girl can even get a scream out however she is attacked by a darkly clothed attacker. In a shaky cam style (which happens a lot during the film) we see the attacker slit the young girl’s wrist only to leave her for dead. The other three members of the group get back and realize that the girl is dead cue the credit sequence. Here we go I thought to myself, another stalk and kill film; I was wrong Will Gordh’s Night Watcher is a whodunit thriller and a damn decent one I might add.

After the opening credits we get to meet the main character Angie. Angie’s mother has committed suicide and now she has to attend a support group for it. As if Angie’s life couldn’t get any harder, she is also a struggling college student. At her first meeting while she is doing the mandatory introduction another new person comes into the room. His name is Brian and that is all the viewer is really told as the scene ends.

Angie sits on a bench after the meeting waiting on the bus when Brian comes up to her. The two begin making small talk about the cities bus system and seem to get along quite well. It is during this though that the movie kind of does get dampened. Zack Stewart’s performance as Brian is wooden at best and it really does hurt the film in a lot of scenes because Allison Tyler’s performance as Angie is done quite well. Angie comes off distant and sad, with good reason of course. The two youngsters set up a get together for later, only after making sure neither of them is seeing someone else of course.

I mentioned that Angie is a struggling college student and we witness this as one of her professors informs her that she simply isn’t going to pass his class. When Angie tells the professor that her mother committed suicide the professor takes sympathy on her and assures her that he will see what he can do. He also is dealing with the death of his very young daughter.

Angie’s home life isn’t that much better; her neighbor is a security guard who treats her very distantly. The guy also just comes across as creepy throughout the film, in fact the whole film is full of creepy side characters that just may or may not be behind the bad things that occur.

Angie and Brian while both at home discover that they have received packages that have no return address upon them. It is almost as if the packages were just dropped off at their door. When the packages are opened both Angie and Brian see footage of their now dead parents in day to day activity. Brian watches the footage with a cold stare while Angie breaks down with tears running down her face.
Angie and Brian of course meet for their date only it’s not really a date at first. Only after Angie mentions that it is in fact a date does it become so and then the two take turns spouting off random facts about each other; for instance Brian likes Italian food but doesn’t like pasta. It is only a matter of time before the subject of their parents suicide comes up, because you really want to talk about that on your first date.

The two however do seem to hit it off, and hit it off rather quickly I might add. Over the next few scenes we are treated to a shot of Brian’s coworker being murdered. The murders in Night Watcher though are all built up to look like suicides so there are some interesting death scenes in the film. Brian’s coworker finds his car running in a locked garage (get it?) and just as you think he is about to get away he is drug right back into the toxic garage.
Red herrings are abounding in Night Watcher and as Angie and Brian try to figure out what exactly links them together they learn that her mother and his father both worked at the same hospital. Now we have a motive and Angie thinks she has a prime suspect in her neighbor. Angie and Brian need to work fast though because they still haven’t had date number two and already their days are becoming numbered.

Will Gordh’s Night Watcher is more of a murder mystery than a body count movie like the cover art suggest. Yes the killer does tape his victims, but their actual death is never caught on tape. When the viewer is finally rewarded (?) with the chance of seeing the snuff tape the video immediately ends when the victim sees the stalker. Not to say that the death scenes that are shown aren’t creative, cause they certainly are. You have the garage asphyxiation mentioned above but you also have a knife against throat influenced overdose and a quite brutal strangulation scene. This movie isn’t made for gore hounds however so the red stuff is kept at a minimum.

Night Watcher does come across slow and depressing at times, but that is what the subject matter is about. The two main characters believe that their parents committed suicide; it isn’t going to be an amusement park fun ride. There is one shot however that set the mood, in a scene when Brian and Angie kiss there is a light still on in the room between their two lips almost as if the two of them are breathing life once again back into each other.

Night Watcher doesn’t have the gore score but it does have some pretty decent scares. In one scene the stalker gets inside Angie’s house and leaves her yet another tape. As Angie watches the tape the stalker lightly plays with her hair from behind knife in hand ready to kill the young girl. In yet another scene after Brian stays the night with Angie she finds a Polaroid picture of the two of them asleep sitting in the middle of her living room. Will Gordh sets up each of these scares quite well with building tension that is released as soon as you know that the characters are going to be safe.

The film almost moves into torture p*rn territory during the last fifteen minutes or so, but it doesn’t last for long and it doesn’t hurt the rest of the tension that the rest of the film has helped to build up. If you want something with a little tension for your first date with that special someone I suggest Will Gordh’s Night Watcher, just don’t talk about any dead parents at least on the first date.