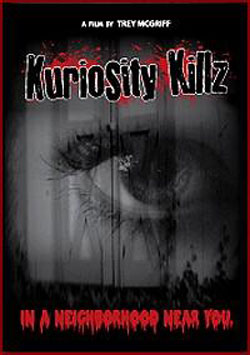 A deranged southern man is making a reality film, the latest installment for which is a date with a local blond.

Trey McGriff’s KUROSITY KILLS is a tongue-in-cheek horror comedy that really has a great blend of elements that make up a great horror movie: a small cast, a setting in the creepy American South, a blond bombshell, a pair of psycho serial killing brothers, a very well constructed sound track, & filming black and white (which I genuinely love). It also makes some very interesting societal observations which I think are kind of inherent to the horror genre.

We have a textbook premise: Ray & Danny are pair of brothers who have picked up the endearing habit of luring girls from the Internet to their tortuous deaths – and Candy is their most recent acquisition.

The movie opens up with Ray Junior & his camera – which is how he spends most of his time. He is continually filming himself, which we can see from the beginning gives him a need to show off all of the time. This is true in both his actions & his choice of words. This actually does something that I find refreshing – putting the characters, not merely the actors, in front of the camera. The comment that I find most telling here is the fact that every character is acting all of the time – for the camera, for one another, or for both. Everyone is at least thinly veiling their true intentions, and are either convinced that the other person is stupid enough to believe them, or just simply don’t care. It shows up in the obvious patter of behavior between the brothers, and the “conversation” between Ray & Candy on the date. The one thing that is clear is the fact that each of these characters is playing a game with certain agreed upon rules that they are convinced they can win – giving them the very casual attitude of a predator playing with its food.

I am very impressed with this film. I am still a firm believer in what you can actually get out of a low budget, some props, a camera, a few actors, and some decent editing.

The early parts of the film that spend time in the “outside world” – before we make it back to our bachelor pad – are beautiful. The story is set in October, and the pumpkin patch where Ray is shopping is filled with the fun but wanna-be scary cheap decorations that are prevalent around quick-buck seasonal / temporary businesses that you see around this time of year. Candy’s getting ready, driving to, & arriving at her rendezvous gives a great feeling of moving into isolation.

I give this show a thumb’s up, and encourage you to check it out. There is a preview available on YouTube.