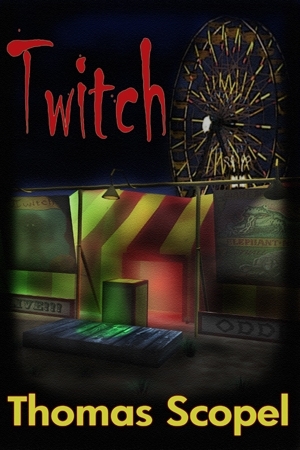 In a dark and gloomy bar, T. Roberts McBaily, a carnival owner known to his employees as McB, waits for a man who will take his money in return for a new sideshow attraction for McB’s carnival. The attraction, a small, baby-like person with no limbs and a pure-white eye caught McB’s attention at a different carnival when he was eighteen. He hasn’t been able to get the poor creature, Twitch, out of his mind. He wants him to be part of his carnival, where he plans to care for Twitch as if he were McB’s child.

Twitch becomes part of the “Oddities of the World” attraction at McB’s Traveling Carnival and Show, but soon after, terrible things happen to those who ridicule or try to hurt Twitch. Is Twitch making these things happen, or are they just awful coincidences?

Twitch is a well-written, creepy tale of a mysterious creature that wreaks havoc around him. You can practically hear the carnival music, the crowds, and the screams of those on the thriller rides. Descriptive passages evoke smells of popcorn, corndogs and French fries. The misfortunes that befall those who dare to ridicule or torture Twitch are graphically described, providing chills and cringes as you read.

However, this novella could’ve used a ruthless editor. Many sentences were incomplete; there were plenty of spelling and grammatical errors to distract me from the story. Once the editing is tightened up, which I highly suggest the author doing, this will be a great story that will give you pause next time you see a sideshow attraction at the county fair. 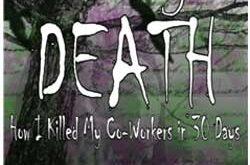 Book Review: The Daily Death – How I Killed My Co-Workers in 30 Days – Author Thomas Scopel