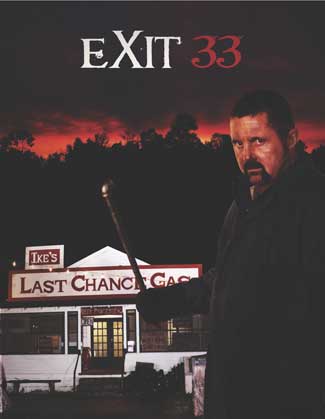 Synopsis:
A few miles off Exit 33 lies Ike’s Last Chance Gas, an old, forgotten hideaway where the reclusive Ike pumps gas and practices his taxidermy skills. Though he might come across as a simple soul, Ike has a dark secret: he’s obsessed with women who have enchanting eyes — eyes he wants to keep for himself. Now, as four friends make their way to their 5-year high school reunion, they all make the mistake of taking Exit 33, and they won’t be making it back to the highway any time soon.

“Exit 33” is a no holds barred gore-fest that dares viewers to look away. With its unrelenting suspense and biting humor, it’s a bloody throwback to slasher classics that will satisfy any horror fan’s bloodlust.

DVD extras will include an actor commentary, an interview with Kane Hodder and deleted scenes.