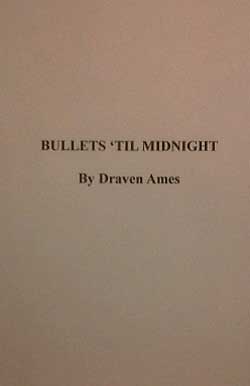 Draven Ames chose an unconventional route, by allowing us to review his book before it even has an agent, knowing that we do not pull punches at Horror News Net. Bullets ‘Til Midnight is a strong debut novel. Judging from this first offering, he should be getting significant buzz in the near future.

Interesting, well-written characters abound, whether they be men, women, children or otherworldly. Michael Decker is the protagonist, and, along with him, we follow multiple characters in close running story lines that complement each other as the author takes us through to the end-game. The novel takes place in the fictional town of Fisher’s Mill, WA, shortly after the death of Decker’s friend. After the death, the successful horror author must decide if he will continue writing. Are his storytelling abilities a curse or a blessing? Or are his stories prophecies?

Being that Mr. Decker is a writer, we are treated to thoughtfully-placed excerpts of his own works throughout the narrative. These other novels-within-the-novel logically advance the story. They entertain in and of themselves, in a noticeably different way. This adds a boost to an already easy page turner. This is a thoughtful and well-utilized plot device that, at times, helped me get lost in the book (and the book within the book). I found myself looking forward to the underlining which designated these portions of the novel, and had to hold back at times so as to not jump the gun and miss something in my desire to reach these nuggets.

Mr. Ames’ novel is more creepy than gory, which is refreshing. I don’t mind gore, but it is nice to have an interesting story told without the author trying to rely on blood-and-guts shock value to distract the reader from lack of substance. There is no lack of substance here. Well written dialog, that never seems forced, helps smoothly guide the way to a final revelation about what has been going on that is far from obvious.

Bullets ‘Til Midnight is very well done and, if there are any flaws contained therein, they were outshined enough that I failed to notice or instantly forget them. Either way, it’s a tribute to the author’s abilities. If you are lucky enough to get a chance, you should read this book– you’ll then be able to brag how you “discovered” Draven Ames before he was famous. Judging from this month’s Cemetery Dance contest, I have a feeling there are going to be a lot more weird and wonderful things coming out of Fisher’s Mill, WA and the mind of Draven Ames.