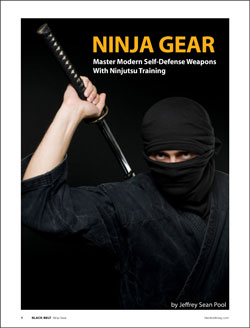 (Valencia, Calif.) In the hands of a ninja, even a cell phone is a lethal self-defense weapon. Discover the secret behind ninjutsu’s seemingly magical techniques with a free ebook–Ninja Gear: Master Modern Self-Defense Weapons With Ninjutsu Training.

“Ninja skills in which we train would best be known as the art of winning,” says Stephen K. Hayes, author of the best-selling series of Ninja books.

Black Belt’s guide to ninja gear is the perfect launching point for any warrior wishing to master modern self-defense weapons. Featuring lifesaving tips and battle-tested tactics, Ninja Gear will teach you how to use all the self-defense weapons at your disposal.

“It is unfortunate that we live in a world where criminals seem to have the upper hand,” says Sean Pool, the author of Ninja Gear. “There are no guarantees, but any tool you pick up could give you just enough of an edge to help you avoid serious injury.”

Whether you are a student of the martial arts or simply curious about self-defense weapons, Ninja Gear will provide you with the ninjutsu training necessary to protect yourself from any attack.

Since 1961, Black Belt has been the world’s leading voice in martial arts. Along with bringing the martial arts out of the dojo and into the mainstream, Black Belt helped make Bruce Lee into an icon and lent credibility to the Ultimate Fighting Championship.