Copyright 1973,Trubadour Press.
Reprinted in1980 by Starstream Products
with permission.

Well, Maniacs! Let me welcome you to the Vintage Zone at horrornews.net. I’m sure that some of you are wondering “Monstermatt, a coloring book? Come on,you can’t be serious?!”

Of Corpse , I am! It’s true.I’m going to share with you one of the ghoulest coloring books that there ever was! Come with me to the shelf of vintage things.(blowing off some dust)
Look here for yourself:it’s the Monster Gallery Coloring Book!!!!

Yours Drool-ly, first became aware of it in the back of Famous Monsters magazine, as a little monster.During a family trip to Nantucket,I spotted it in a book store/gift shop.This would have been right around 1978. The cover image of The Phantom of The Opera leering over his shoulder,half turned ,with a grimace, while playing the organ, was an eye grabber!Was this the same image from the ad in Famous Monsters? ! It was!!

The book is printed on a thicker paper stock Than usual.We can assume that it is meant for watercolors,markers and colored pencils, in addition to crayons.

In the book,you’ll find it has fifteen different portraits of individual monsters,beginning with The Fly, The Monster of Frankenstein,Mummy, Creature From The Black Lagoon, Hunchback of Notre Dame, Godzilla, Cyclops, Werewolf, The Abominable Snowman, Mr,Hyde, The Phantom(also the cover boy),Morlock,Vampire,King Kong,and ending with Bride of Frankenstein. A one page written summary of their story accompanies each illustration by Mark Savee. It doesn’t follow your
standard coloringbook format,of a book lengthed deveoping storyline.But,with each of eye popping beautiful renderings of our
classic favorites,you don’t mind at all!

Each illustration is so well done.Savee gives you the spotlighted monster,with scenerey that fits their individual story.Almost as if
they were taken from a storybook. 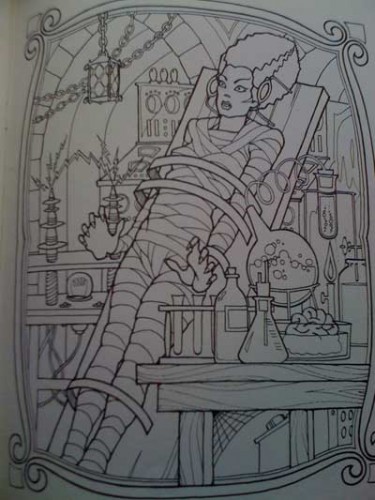 Another way you might recognize the drawings,are as card art for the Tomland Famous Monsters of Legend action figures. Well,almost. If you compare an example of Savee’s work with the card art,there are differences. One wonders if somebody just aped his drawings and made changes?!These are “knock off” figures ,so it is don’t worry,we will explore those further at some point. Lets take a look at the character summaries, that accompany the drawings.

Each summary varies from monster to monster.Leah Waskey gives you a set up for the monster’s portrait. Also, Waskey gives you a quote at the top of the page, from various sources.The book or story each monster came from,some from philosopy,and even a bible quote.Not every monster gets a quote,though.

With fifteen different monsters,it’s dificult to give you examples of every one.What we can do is highlight one Of them.How about an anniversary celebrant?The 75th anniversary girl’s picture and story can give you the goods!So,let’s look at The Bride of Frankenstein! “We belong dead.” Starting with a quote from The 1935 sequel,”The Bride of  Frankenstein”,Waskey gives you a pretty decent rundown of the events  in the final act of the Bride’s story.

The Bride is brought to life in a laboratory by Dr.Frankenstein,and  Dr.Pretorious, while being watched by the original creation,the Monster. Tensions are high,as the doctors try to complete the process.Frankenstein wants to give his monster a mate,in hopes that he can be free of his self created curse.

A combination of bodies,and parts make the Bride in the same fashion  as the monster groom.Kind of like “Build a Bear Workshop!”.She is  strangely beautiful, even in an unnatural state of animated lifel

In what is described as a wedding of a man made Adam and Eve, the Bride  is led by the doctors to the monster.She is frightened by the sight of him,and hisses and shrieks. She rejects the monster groom!

This rejection brings tears to the monster.He realizes he can’t have a true mate,and longs for death,which he can have with the draw of a lever.They will be together in death.

If you want to hunt this monster book down,their are two things to look for.The original version will bring a higher price in the collector market. The Starstream version obscures the front cover with a green bar along the side.You can find either version through the usual auction sites or amazon and such.Usually, the original will go for $25.00-$40.00,and the reprint $10.00-$15.00.As always:happy hunting!